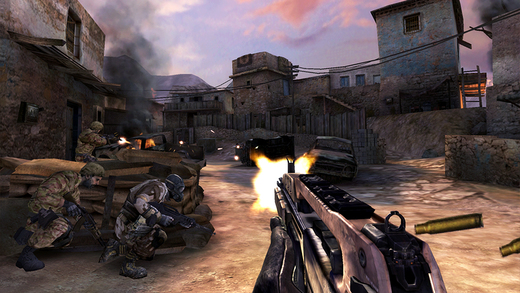 Call of Duty: Strike Team, one of the iOS entries of the series released a while back in all regions, is now available for a reduced price on the App Store.

The game has been discounted to celebrate the Call Of Duty Championship 2015. For a few days, the game will be available for $1.99 instead of $6.99.

On a related note, Activision has also confirmed that Call of Duty: Heroes, another entry of the series now available on the App Store, has received a new update featuring a new character – Ilona from Call Of Duty: Advanced Warfare.

Call of Duty: Strike Team is a single player first person shooter game which also features a third person view that can switched on the fly, allowing players to always have the best view possible at all times. Even though the third person view mode makes Call of Duty: Strike Team feel different from other entries of the series, the game is still a nice title that fans of the series will definitely enjoy.

Call of Duty: Strike Team is now available on the App Store. The game will be available for a reduced price for a few days so make sure to take advantage of this deal as soon as possible if you have yet to play this game.