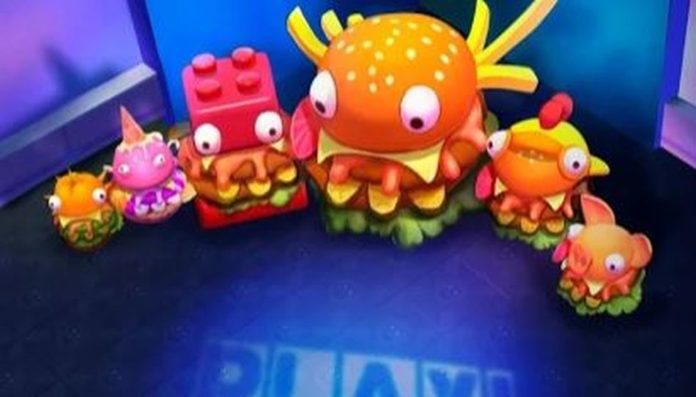 In our article today we will share with you all of our Burger.io tips and cheats to help you grow into a big and juicy burger which is going to take over the world! (or so it would seem considering how big you can get)

It might’ve never occurred to you that you would be playing as a burger and run around the map in search of other tasty treats which will grow you bigger, but here we are, choosing our favorite fast food meal as a “weapon” against other players! But enough with the praising of this burger!

You’ve come here to learn how to be the best in the game and how to grow big and swallow all the enemies. So therefore let’s not waste another second and dive right into the Burger.io tips and tricks! 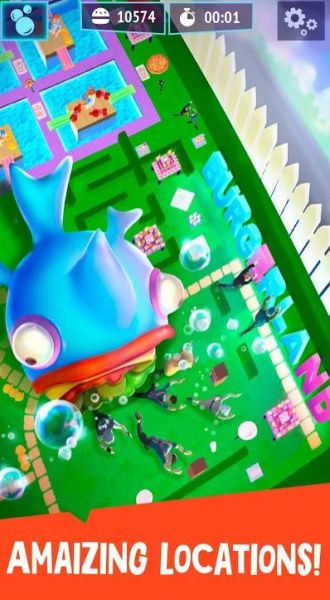 This is one of the most important things you need to learn. By adjusting to the game’s controls you will get a better grip over the burger and learn how to better control it in every situation you might encounter.

Once you get used to how the game feels when you play it, then you should progress further and focus on the objectives a little more, as to collect all the goodies and be the first one at the end of each round (we’ll tell you more about that below).

Eat the smaller foods you see on the ground

When you’ll start a new stage you will see scattered around the map several foods, from hot dogs to doughnuts. They are way smaller than you at start, so you should take a good look at where they are located and try to find similar locations (for example the yellow squares).

Once you have ate quite a few, you will grow and continue growing by eating more and more. Basically just eat everything that is smaller than you. You might have noticed the big sandwiches down on the ground too. Well, once you are big enough you can eat those too! 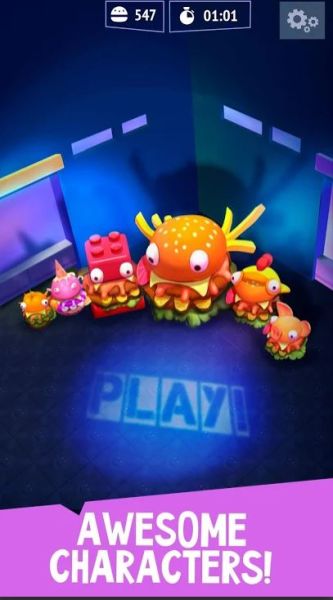 Avoid the other players at start

Right when the stage is starting, you should do everything in your power to avoid other players. Run as fast as you can towards the locations with the smaller foods (as we mentioned above) and start eating to grow quick.

There might be some more experienced players which are doing this and then immediately run towards the other players to eat them, so that’s why you need to grow quickly to avoid getting eaten by them.

When you too will get better used to the controls and start learning a pattern in the game, then you should (in my opinion at least) turn your attention towards the other players who are smaller than you and eat them right away! Run away and chase them if you must – but eat them! 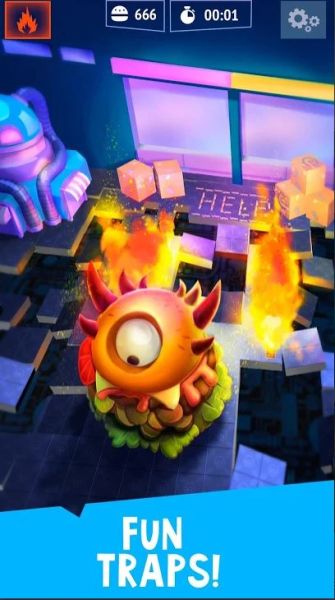 You can knock down some food carts because they will give you all the food that’s sitting on top of it. Once you bump into them, they will fall down and drop everything. Eat as fast as possible and try to do it before other players run and steal your food.

If you know where they are all located, you can use this as a strategy throughout the game: at start you run to the locations with food on the ground, then immediately run towards the food carts and bump into them to take the food down, then you run to other players and eat them.

The game is made in such a way that you simply cannot stay in a single position for a long time. The ground underneath you will disappear and that’s for the best. That way every player who queued up and is afk will be eliminated. 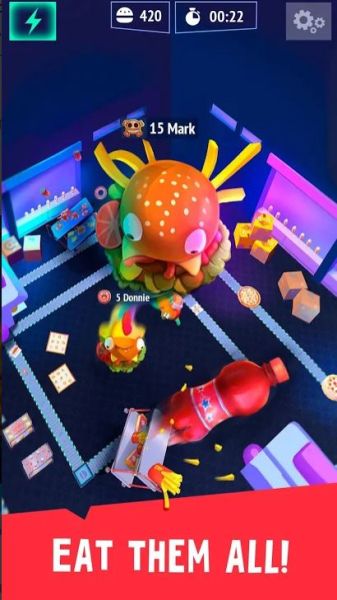 You can make use of the falling ground to bait the enemies towards you, and if they don’t have quick reflexes they might fall by failing to dodge it. Of course, I don’t recommend this at the very beginning, as you might end up falling down yourself!

At start you play as a very classic burger. This burger can be changed if you want to be something a little more… extravagant (or if you don’t like meat)! There are several skins you can choose from and they can all be purchased with coins which you get once you finish a stage, as rewards.

These are the Burger Skins:

– Piggy – Can be bought with real money, but it comes with an Avatar and Remove Ads

Get more coins for free

You can obtain more Coins for free in the game, which you can use to unlock new skins and maps. Although there are only 2 maps at the moment, with more coming soon to the game, they cost Coins to unlock, so you need to be prepared if you want to change the scenery.

Once you have tapped on the other map to unlock it (costs 500 Coins) it will not ask you for approval (or even an “Are you sure you want to unlock this?”) and it will immediately remove 500 coins from you and unlock it. So before you do it, make sure you don’t need the coins for something else! 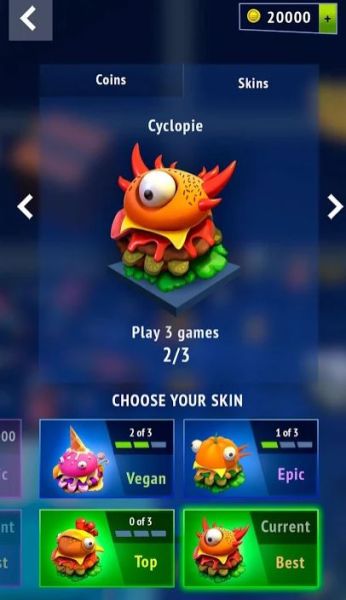 If you want to get coins for free without playing, you’ve said enough! There is an option for that too! By simply logging in to the game every day (for seven days straight) you will get increasingly better rewards, mostly coins!

On the seventh day you will get a surprise, so you should make sure you just log in even if you don’t actually plan on playing that particular day. Not only will you collect enough coins to unlock a 1500 Coins Skin, but you will also get a cool mysterious gift!

Watch an ad to triple the Coins you get

After finishing a stage, you will receive a box full of Coins. This will give you more coins if you take the time to watch an advertisement. By doing so, it will give you 3 times more coins than you’d normally get, so it’s definitely worth it given that an ad takes at most 30 seconds to watch. (quicker than a level)

These would be all of our Burger.io tips and tricks that we have for you right now! If you know some other cool and useful game tips, leave them down in the comments below and share them with fellow burger lovers and players!