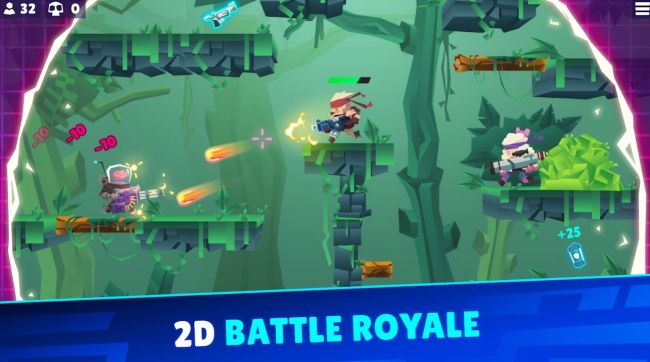 In today’s article we are going to check out all of the Bullet League tips and cheats and help you better understand this battle royale type of game, so that you can always try to be the last man standing!

Since the game genre revolves around destroying enemies, becoming more powerful in the process and trying to survive until the end (hopefully with the other players eliminating each other before you) you will most likely win a ton of matches and become the best very quickly, if you follow our game guide.

But enough with the introductions – let’s not waste another second and check out what you came here to see, all of our Bullet League tips and tricks that will help you win more matches and destroy all other enemies!

As soon as a battle starts, you will be placed in a random spot on the map – try to realize where you are in comparison with the other players and find a relatively safe spot which will keep you from getting hit from multiple directions.

Avoid staying in open space which will allow you to get hit form multiple angles (because that can happen easily, enemies can hit you from the front, back, above or below, or all of the above at once if you’re unlucky) and instead just go to a platform which is pretty far from the rest, but also not in the danger zone.

If you just avoid battle and let the others destroy each other quickly, you will see that the game is a lot more easy that you first might have thought.

As much as this is a battle royale type of game (yes, Fortnite and all that) it is very much different from it! There are platforms and 2D graphics, and so you need to be very quick in your decision making and try to always overlook the entire screen as you go.

Find the good spots, the bad spots and figure how you need to be moving, since it’s very much unlike other battle royales out there, you can’t hide and wait it out. You can only try to dodge and move erratically (yep, I said it).

If you played Mario back in the day, or you did some platformer speed runs, then you might just be a god in this game, as long as you manage to survive!

Watch an ad after the battle for extra rewards

After a match ends, you will be taken to the post-game lobby, where you will see your stats and in the bottom right, sometimes will appear a button which will offer you extra keys in exchange for watching an advertisement.

I suggest that if you want to save up a lot of keys, then you watch this ad because it will come in handy quite a bit – you will want every bit to help you acquire more keys, since they will let you unlock more boxes.

Look for the loot crates

While you are in a game, sometimes various loot boxes will pop up on the screen at a certain location. You should make sure that you are slowly but surely getting to that chest before anyone else does, because the chests contain various goods inside.

To open a loot crate, simply tap on it and wait a little bit, because they won’t open as soon as you tap them. You need to wait for a couple of seconds, so if you are surrounded by enemies, opening a loot crate might not be the best idea! However, when you are alone, take this chance and open it to claim all the goods inside.

You know how in pretty much every other game out there, the objects you can interact with will glow a little? Well, no matter if you noticed that for the purple crystals or you just found that out now, you can also interact with them!

So make sure that you tap on those purple crystals to harvest various building materials because those will help you get out of tough spots. For example, if you are stuck at the bottom of a pit or whatnot, and there is a crystal nearby, harvest it and you will be able to craft a crate which you can climb on to get out!

Heal up and shield up!

Sadly, you won’t be able to regenerate HP passively in this game, but you’ll be able to collect various healing and shielding items which you can use to make you a little more healthy. You can pick them up from crates or other random locations, so if you get shot, don’t waste any more seconds and use a healing item. To heal up, just tap it to equip it first, and them tap on the shoot button to use it.

Don’t save up the shields for the last moment, because you can’t really shield yourself if you’re dead! So use them right away because you never know when you will be shot at by an enemy and that shield will have saved your life.

In the bottom left corner of the screen you will see a yellow button which will let you watch an advertisement (or actually more than one) in order to open some boxes. You can watch a total of 5 ads to claim 5 boxes, but the fifth one is a Loyalty Box, which contains much better goods.

You should always try to open them whenever you can, because you can always use all the goods contained inside to make you stronger. Make sure that you watch all 5 ads daily because the Loyalty Box is well worth it!

As you keep on collecting various weapons fragments from all of these chests, you should also start upgrading your weapons. By upgrading them you will increase your level by quite a bit, so all shots dealt with the upgraded weapons, will deal more damage when you are equipped with them.

When you have upgraded your weapons to milestone levels (level 8, level 16) the weapons will gain extra powerful stats, such as increased reload speed, throw range, damage and many more, depending from weapon to weapon.

The more you upgrade your weapons, the more your power level will increase. The power level is basically your level, which will also increase your HP and defense, so you will be a little bit more tanky.

Check out the Shop daily

In the Shop window (left side of the screen) you will see various daily deals which will refresh every few hours. You should try to purchase the ones which you find the most useful to you, because they will refresh and bring about new ones.

So if you are looking for something in particular but can’t find it yet, just wait a little and save that money for when it will become available in the shop, at the discounted price.

You could save up the Gems to spend them on various boxes (Big Box, Mega Box and Buy VIP Access Box) but as a f2p player, you always want to save up for the 320 Gems one, unless you are a VIP and can buy the VIP Access Box which is way cheaper, but requires you to be a VIP player.

Watch an ad for free coins

Some of the offers in the Shop will be given to you for free, and all that you need to do is watch an ad to claim them! That applies to the coins, which will be used for upgrading weapons and helping you become stronger. If you are running low on coins, it’s never a bad idea to spend a couple of seconds to watch an ad and claim free coins in the Shop!

Collect Trophies and get rewards from the Trophy Road

The more games you win, the more Trophies you will collect – you can find in the upper left side of the screen the Trophy Road, which will give you tons of awesome rewards (Boxes, Coins, Gems and Skins) so try to collect as many as you can and claim more rewards from this, because they are permanent.

Every single day you will have a list of missions in the top right corner of the game’s main interface. There you will have some missions which will give you Keys as rewards, which will slowly but surely add up to unlocking more boxes.

These would be all of our Bullet League tips and tricks that we have for you right now. Do you know some more useful tips and strategies to be the last man standing in the game? Feel free to share them with us and the other players down in the comments section below! 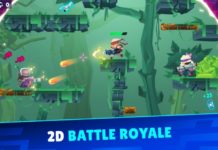