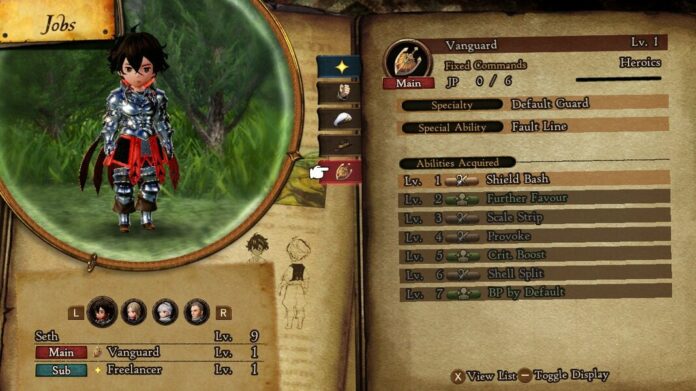 Bravely Default II features 24 different Jobs, all coming with their own unique abilities. Some of these Jobs are geared toward offense, others toward support, and a few others toward defense. The Vanguard is the first Job you will unlock that will let you turn any character into a tank that can take more than a few hits, protecting other party members as they deal damage to the enemy.

Here’s everything you need to know about the Vanguard Job.

The Vanguard is the first defense-oriented Job you will unlock in the game, and it is a job you will probably continue using for a while, as its defensive abilities work great against bosses. The Vanguard isn’t all about defense, however, as its proficiency at multiple weapon types makes it easy to exploit weapon weaknesses. The Vanguard damage output cannot compare with that of other Jobs, however, so it’s always better to focus on aggroing enemies during combat with the Aggravate and Infuriate abilities, rather than going straight on the offensive, especially during boss battles.

The Vanguard can also work amazing as a supportive unit. The Gift of Courage ability gives one of the user’s BP to another party member, which works great during boss battles, considering you may be Defaulting a lot to increase defense.

Shields in Bravely Default II affect speed, aim and evasion, so there’s a clear trade-off when equipping them. The Vanguard Shield-Bearer Speciality removes these penalties, making the Job even more effective. The second Speciality, Attention Seeker, improves the Job’s offensive capabilities, as it increases physical attack power and critical changes depending on the number of enemies that are targeting the Vanguard.

The Vanguard Special Ability, Fault Line, further improves the Job’s defensive capabilities by granting a 30% increase in physical defense while unleashing a powerful earth elemental attack. To use this Special Ability, you need to use Heroics 13 times.

The Vanguard Heroics abilities are a mix of offensive and defensive abilities that make the class surprisingly versatile.

Shield Bash (10% HP) – Use equipped shield to perform an earth-imbued physical attack on a target and slightly delay their next turn.

Skull Bash (12 MP) – Perform a weak physical attack on a target and decrease their magical attack by 7% for five turns. Stats cannot be reduced below 65% of their base value.

Pain into Gain (1 Cost) – Taking damage in battle while not Defaulting has a roughly 30% chance of increasing physical attack power by 1-3%.

Aggravate – Increase the user’s likelihood of being targeted by 25% for three turns. Stats cannot be increased beyond 200% of their base value.

Sword of Stone (26 MP) – Perform a powerful earth-imbued physical attack on a target.

Shield Stun (25% HP) – Use equipped shield to perform a quick physical attack on a target and significantly delay their next turn.

Defensive Offense (1 Cost) – Performing an attack with a weapon equipped will cause all damage to the user to be reduced to 70% until their next turn.

Enrage (24 MP) – Guarantee that an enemy’s next two actions will be aimed at the user.