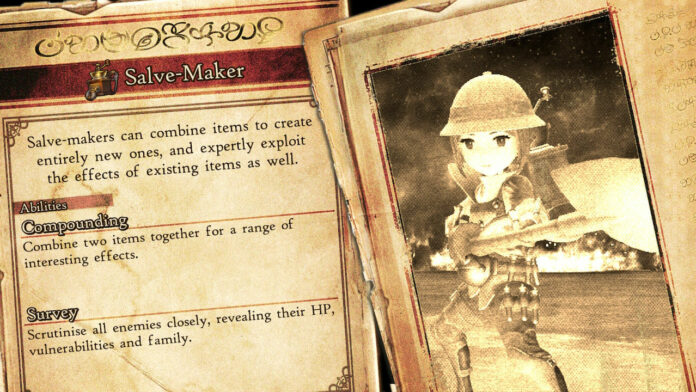 Abilities powered by HP, MP, and BP are the norm in Bravely Default II, but there are Jobs in the game that can take better advantage of items without having to spend additional resources. This is the case with the Salve-Maker Job, an optional Job that has great offensive and support capabilities. But only if you have enough items.

Here’s everything you need to know about the Salve-Maker Job in Bravely Default II.

The Salve-Maker is a pretty straightforward Job that can be deadly when its abilities are used correctly. The Job can maximize the efficacy of items in your possession, doubling their effect and even mix them for some amazing new effects. By leveling up the Job, you will get access to abilities that can make boss battles much easier, like BP Tonic, which can be used to restore BP, and Status-Conscious, which increases the chances of successfully applying status ailments to enemies. As most bosses in Bravely Default II are weak against at least one status ailment, this ability can make a huge difference.

Even without its unique abilities, the Salve-Maker can be a good Job to bring in battle thanks to its decent stats. Magic Defense and Healing Power are quite high, so take this into consideration when picking a sub-Job.

The Salve-Maker first speciality, Master Medic, lets you get one healing herb and one magic herb each time you win a battle, as well as the chance of not expending an item when used. The second speciality, Unencumbered, is learned at Job Level 12 and it increases all item effects if the Salve-Maker doesn’t have any weapon equipped. BP cost of all abilities is also reduced by one.

The Salve-Maker Special Ability is Putrid Liquid, a multiple-target attack that has the chance of inflicting poison, paralysis, blindness, silence, and contagion while increasing Physical Attack and Aim by 30%. You need to use Formulation 13 times to use this ability.

The Salve-Maker abilities are extremely varied, and range from support to healing and offense.