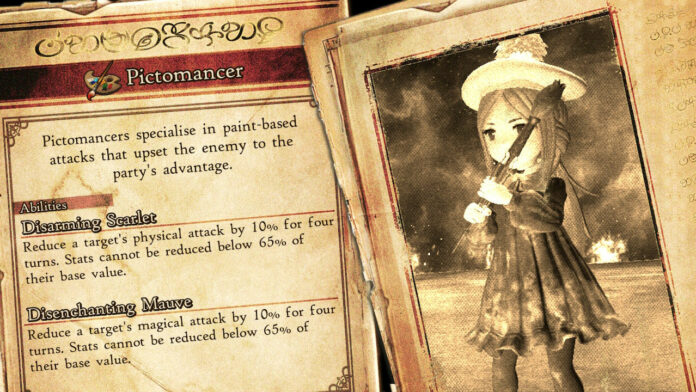 Bravely Default II features a lot of different Jobs that let players customize their characters in several different ways. While the basic Jobs earned at the beginning of the game are extremely straightforward, the advanced ones earned later in the game are way more interesting. Among them is the Pictomancer Job, the ultimate supportive Job found in the game.

Here’s everything you need to know about the Pictomancer in Bravely Default II.

The Pictomancer Job is a very unique Job that is mostly geared towards support. The Job’s abilities let you debuff enemies, making it invaluable to have in boss battles, far less in regular enemy encounters that can be won in a few turns. The Job’s first speciality, Self-Expression, makes Artistry abilities work as buffs instead when applied on oneself, expanding the Job’s offensive capabilities considerably. Considering it comes with great MP and Magic stats, you may want to pick a magic-oriented sub-Job for maximum efficacy.

The Pictomancer also works amazing as a sub-Job for tanky Jobs that still need MP to unleash their abilities. The Convert MP ability, which converts received damage into MP, is extremely useful, and so is the Sub-Job BP Saver, which reduces BP costs of Sub-Job abilities.

The Job’s Special Ability is Dark Art. This ability, unleashed after using Artistry 12 times, decreases enemies’ physical and magical defense for three turns while increasing the user’s Magical Defense and Restorative Power by 20%.

The Pictomancer learns a mix of supportive and offensive abilities that make it great as both main Job and Sub-Job.