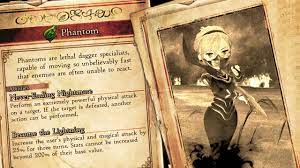 Every role-playing game featuring a class or Job system really cannot do without a Ninja class that overpowers enemies with speed and finesse. This is exactly what the Phantom Job does in Bravely Default II, an extremely fast Job that however requires the right sub-Job to unleash its true potential.

Here’s everything you need to know about the Phantom in Bravely Default II.

The Phantom is among the fastest Jobs in Bravely Default II, getting way more turns in less time compared to other Jobs. The rest of its stats a little underwhelming, with the exception of Strength, which is pretty high.

Even with its low defense and mediocre HP, you will probably want to have a Phantom in your party once you have unlocked it, as it comes with some amazing abilities that can make any battle a walk in the park. The Results Guaranteed speciality makes every altered status inducing ability work every time, something that can make boss battles very easy, as most of them are weak against at least one status ailment.

Once you have leveled the Job up enough, it can become a physical damage powerhouse, thanks to the Dual Wield ability that lets you wield a weapon in each hand with no penalty. This is the main reason why you should spend some time levelling up the Job, as this ability is great to have for any physical damage oriented Job.

Outside of Results Guaranteed, which is learned at Job Level 12, the Phantom starts out with the Achilles’ Heel speciality, which grants a 50% for any physical or magical attack that exploits a weakness to be a critical hit.

The Phantom’s Special Ability is Afterimage. This straightforward special attack deals physical damage to a single enemy while increasing the user’s Evasion and Critical Chance by 15%. To use this ability, you must use the Attack command or Occultism abilities 13 times.

The Phantom’s Occultism abilities are extremely varied but are mostly geared towards offense.