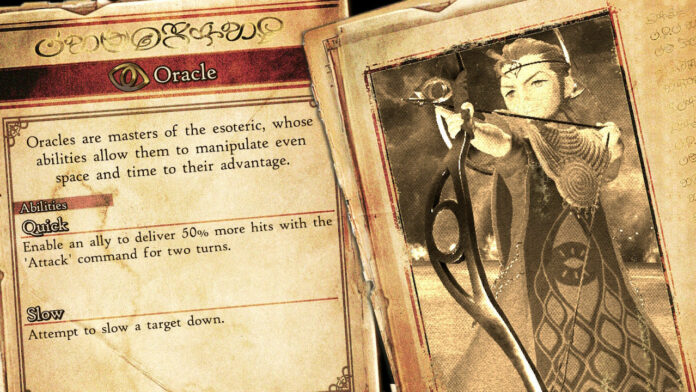 Bravely Default II seems to lack one of the classic Final Fantasy Jobs, the Time Mage, but appearances are deceiving, as it usually is. The Oracle is effectively the Time Mage-like Job in the game, but it is also much more than that, as it has the potential of becoming a powerhouse that can destroy all sorts of enemies with ease.

Here’s everything you need to know about the Oracle in Bravely Default II.

Being a Magic-oriented Job, the Oracle’s highest stats are MP and Magic. Every other stat is extremely low, so only Magic-focused Jobs are good choices for sub-Jobs. Things, however, change quite a bit with the Moonlighting speciality, learned at Job Level 12. Thanks to this ability, the sub-Job stat adjustments, and weapon aptitudes are applied to the user’s main Job, giving you the ability to create some amazing, and effective, Job combinations.

Even without the second speciality, the Oracle is a great Job to bring in battle, thanks to the Divination abilities that let players manipulate time. The ability to use Reflect is extremely important in boss battles against enemies that use magic, as this ability lets any character reflect back at the enemy any type of spell.

The Oracle first speciality, In One’s Element, works great with the proper sub-Job, as it increases weakness damage by 40% and reduces elemental magic cost by 40%.

The Oracle’s Special Ability is The Hastening. This ability makes all allies act sooner while increasing the user’s Magical Attack and Defense by 15%. You need to use Divination 12 times to use it.

The Oracle’s Divination abilities include time manipulation and supportive abilities that are great to have, especially in boss battles, as well as some powerful offensive spells.