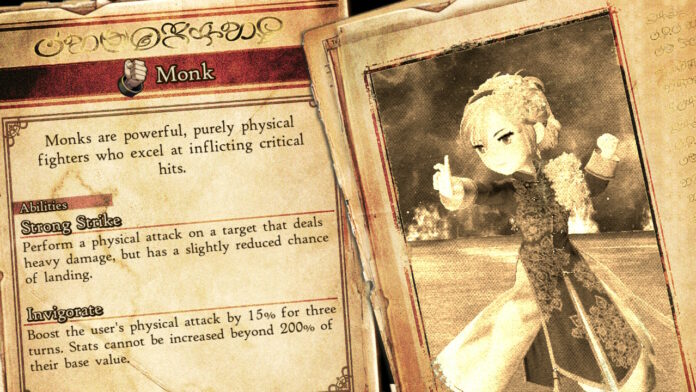 Appearances can be deceiving, sometimes. Many Jobs in Bravely Default II look like they are good only at certain things like dealing damage or supporting the party, but in reality, they can be good at multiple things.

This is definitely the case of the Monk. While the Job is indeed focused on delivering huge amounts of damage, its abilities make for a very versatile Job that works even better in conjunction with specific Sub-Jobs.

Here’s everything you need to know about the Monk Job in Bravely Default II.

The Monk excells at dealing physical damage to enemies thanks to its high strength and the Bare-Knuckle ability, which boosts physical attack by 80% and aim by 30% when fighting empty-handed. The Job also has extremely high HP, which are needed to unleash some of its best abilities, and very fast speed. This, in conjunction with a selection of useful healing abilities, make the Monk great at support as well, especially if paired up with another support-focused Job.

When fighting against enemies that like to default often, there is no better choice than the Monk. The powerful Quigon Wave ability lets you pierce through the default defensive capability, dealing full damage at the cost of 20% of the current Monk’s HP.

The Monk’s Specialities augment his physical damage dealing abilities. Concentration increases critical change every time Invigorate, Inner Alchemy or Mindfulness are used for the duration off the battle. Single-Minded not only prevents berserk, confusion and charm status ailments, but it also reduced the time needed to get another turn if any Martial Arts ability is used or when defaulting.

The Monk’s Special Ability, Eternal Inferno, makes the Job even better at both dealing damage and restoring HP, as it increases restorative power and critical chance by 15%. The attack is based on the fire element, so it is more effective against enemies weak to the element.

The Monk features a mix of offensive and supportive abilities that make it an extremely versatile Job.

Strong Strike (18% HP) – Perform a physical attack on a target that deals heavy damage, but has a slightly reduced chance of landing.

Bare-Knuckle Brawler (1 Cost) – Boosts user and equipment’s physical attack by 80% and aim by 30% when both hands are empty.

Firebird (15% HP) – Perform a fire-imbued physical attack on a target. Target’s resistance to fire is reduced for two turns.

Mindfulness (1 BP) – Restore 15% of the user’s MP and cure silence, dread, and contagion.

Invigorate (20 MP) – Boosts the user’s physical attack by 15% for three turns. Stats cannot be increased beyond 200% of their base value.

Tortoise Kick (10% HP) – Perform a physical attack on a target and delay their next turn.