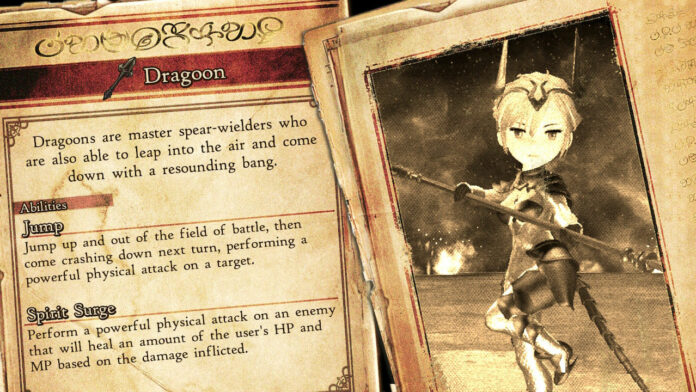 The Dragoon Job is often among the best Jobs in any game it appears in, and this is exactly what happens in Bravely Default II. This Job is among the most balanced Jobs in the entire game, making it extremely useful in a variety of different situations.

Here’s everything you need to know about the Dragoon Job in Bravely Default II.

The Dragoon is among the most balanced Jobs in all of the game, something that is reflected in the Job’s stats, which are way above average with the exception of Magic and Healing Power, which are extremely poor. Not that it really matters, as the abilities learned by the Dragoon cover for these poor stats.

Even if all stats were below average, the Dragoon would still be an amazing Job, thanks to the Jump ability. This ability lets any character jump in the sky to unleash a powerful physical attack a few turns later. While in the sky, the Dragoon cannot be targeted by the enemy, making jumping an excellent defensive maneuver as well.

And even if targeted by the enemy, the Dragoon comes with some amazing abilities that can turn the table easily, like Comeback Kid, which restores any status ailments two turns after it becomes active, restoring all HP and MP at the cost of one BP.

The Dragoon’s starting speciality, Momentum, improves the Jump’s efficacy by increasing its speed and power depending on the character’s weight. Highwind, learned at Job Level 12, adds any additional effect applied to regular physical attacks to jumping attacks as well while removing any stat reduction for dual-wielding as long as the Dragoon equips a sword or a spear in the left hand.

The Dragoon’s Special Ability, Thuderbolt Thrust, works great against enemies weak against thunder, as it unleashes a powerful thunder elemental attack while increasing the user’s aim and evasion by 15%. To use this ability, you need to use Dragonics 13 times.

The Dragoon learns a mix of offensive and defensive abilities that make the Job an amazingly balanced Job.