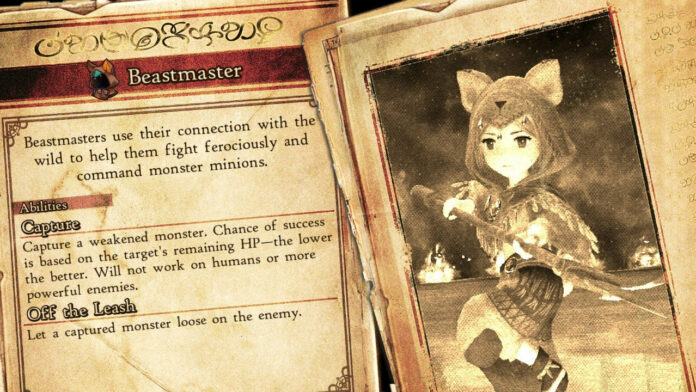 Some of the Jobs in Bravely Default II are pretty versatile, letting you play a character in different ways, but almost none of them can compare to the Beastmaster. Thanks to its unique ability to capture monsters and summon them in battle for different effects, this Job can play the damage dealer, the healer, and the supporter with ease.

Here’s everything you need to know about the Beastmaster in Bravely Default II.

The Beastmaster is one of the best Jobs available in Bravely Default II, and it can be a real powerhouse if played correctly. What sets it apart from other Jobs in the game is the level of versatility granted by the ability to capture and summon monsters for a varied of battle effects. Stats for this Job aren’t amazing, but the relatively high Defense and Magic Defense make it a good choice for tanking.

Mercy Strike is among the most important abilities the Beastmaster can learn. This attack deals tons of damage, bringing a monster to a level of HP that lets the Job capture the monster. Even if you are not looking to capture an enemy, you should use this attack as much as you need, since it really is good, and one of the best damage dealing abilities the Beastmaster has, alongside Raw Power, which increases physical attack damage by 10% every time the Brave command is used.

MP Saver is also a very good ability that all magic casters should learn as soon as possible. Given how much MPs magic costs in Bravely Default II, the 20% MP cost reduction is rather welcome.

The two Beastmaster Specialities play well with the Job’s strength. Animal Rescue, which unleashes a random captured monster when HP falls below 20%, is not particularly useful, but Creature Comforts, learned at Job Level 12, is a game-changer for the Job, as it increases stats based on the number of monsters you have captured.

The Special Ability, Their Master’s Voice, not only deals damage to all enemies, but it also increases Physical and Magical Damage by 15%. To use this ability, you need to use Taming 13 times.

The Beastmaster features a wide selection of abilities that contribute making this Job incredibly versatile.