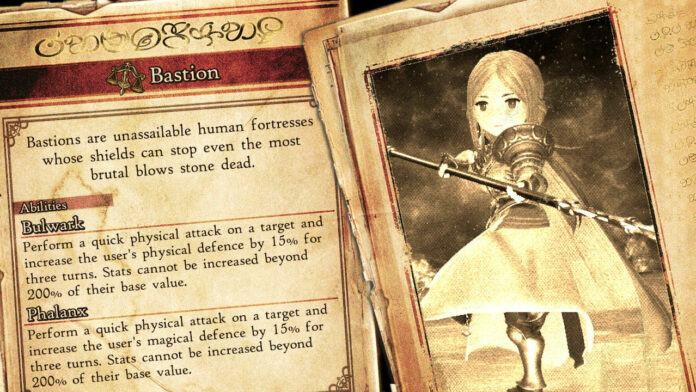 Jobs geared toward defense may not be as flashy as those that are more offensive-oriented in Bravely Default II, but they are still important Jobs that you should consider bringing into battle. The Bastion is definitely among the best defensive Jobs in the game, a Job that is capable of absorbing all sorts of damage and protect the rest of the party members as they take down the enemy.

Here’s everything you need to know about the Bastion in Bravely Default II.

The Bastion has some pretty high stats, excelling at HP, Defense, and Magic Defense. Agility is on the low side, but this is hardly an issue for this Job, as it is meant to be played defensively.

The Bastion’s most important abilities, Rampart and Vallation, create a shield that absorbs a single physical and magical attack, making them invaluable in boss battles. Additionally, the Bastion comes with all sorts of abilities that last a single turn, but they can be made to last longer with Auto Guard. This ability is a permanent Default state that slows down the Bastion to make its abilities last a little longer. Pair the Job with other fast Jobs for maximum efficacy.

For the rest, the Bastion is pretty straightforward. Its offensive capabilities are only decent, so it is probably not a good Job for random encounters that can be won in a few turns.

The Bastion’s Special Ability is Invincible, a powerful light elemental attack that also creates a barrier that protects all allies from physical and magical attacks once and increases the user’s Speed by 20%. To use this ability, you need to default 12 times.

Being a defense-oriented Job, the Bastion mostly learns support abilities meant to make the party stay alive in the hardest fights.