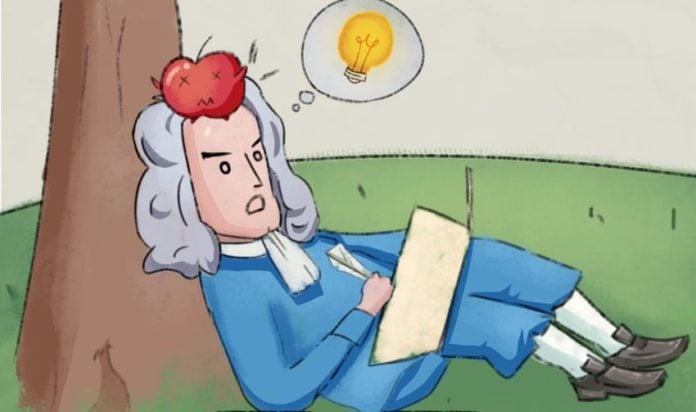 Brain IQ: Tricky Puzzles is a brand new mobile game that challenges you to think outside the box in order to solve increasingly difficult challenges. And we’re here to help you get through them all easily by sharing all the Brain IQ answers in this article.

While the game does start our with very simple challenges, they get more and more difficult as you progress and as we’re solving them, we end up scratching our heads more often than not.

But you shouldn’t worry about that as we have all the Brain IQ: Tricky Puzzles answers for you below in our complete walkthrough for the game. So let’s get this started!

Level 1: Which One is the highest?

Level 2: Help Newton to find the law of Gravitation

Tap the apple directly above the guy’s head.

Level 3: Find the darkest color on the screen

Tap the word “darkest” in the question’s text, as that is the one written with black.

Tap and hold the road, then drag it to the left side of the snail.

Level 6: Put the elephant into the fridge

Tap the fridge to open it then simply drag the elephant inside.

Level 7: Wake up the bat

Tap and hold over the sun, dragging it to the right side of the screen to let night come.

Level 8: The fire is dangerous!

Simply tap the right knob on the burner to turn off the fire!

Level 9: Who would you save, your mom or your girlfriend?

Using two fingers, tap both the mom and the girlfriend in the pool

Level 10: Help the bus to move out

Pinch over the bus with two fingers to make it smaller. Then hit the Start button and you’re all set!

Level 11: How many stars would you like to rate the game?

There are no limits: just find the pairs on the screen. Tap to turn an image around and do so until you found all pairs.

You only have a bit of time to look at the hamburger. Take a screenshot with your device if you can’t remember or check out our image below:

Then simply create the hamburger using the ingredients in the correct order!

Level 14: Help the dog to lift the weight

Using two fingers – one from each hand, tap the red buttons that will appear at the bottom left and bottom right of the screen. Tap them quickly and the dog will lift the weight.

To wake up the dog, get the shovel behind the tree and use it over the three piles of dirt to collect the items. Then drag the bone over the dog.

Pinch out over the hole to make it larger, than tap the scissors so that the fridge falls through.

Level 17: Which one is heavier?

Using two fingers, move the scales until they are evened out as none of the items is heavier than the other.

Drag the items over the image as shown in our screenshot to quickly solve the puzzle.

Swipe your finger over the rightmost match, over and over again until it burns out.

First, drag the clouds away from the sun. Then, remove the guy’s hair and drag his bald head over the sun ray, somewhere in the middle of the ray, so that the wood catches fire.

Tap the numbers of the weight and write 0 instead. Then, simply drag the weight up.

Level 23: How many leaves does this tree have?

Shake your device so that most of the leaves fall down. Then count the remaining ones: the answer is 4.

First, tap the five basketball images. Then, tap the word “Soccer Ball” and write “Basketball” instead, then tap the newly created ball.

Drag the middle cloud away for a bit to reveal the red x sign. Drag it to the top right of the image, then tap it to remove the photo.

Level 26: Take down the pirate ship.

First, pinch out over the cannonball to make it larger. Then tap it so it gets inside the cannon. Finally, tap the cannon to shoot.

Level 27: Help the snail to get the coin

Turn your device upside down, so that the snail falls over. Then simply hit the right arrow until it’s above the coin: turn your device again to pick up the coin.

Level 28: Put apple in each box

Drag the word “Appple” over the empty box.

Level 29: Take down one ship

Drag the skull image over the boxes on the middle ship, over the ship’s flag. The two other ships will fire at it and take it down.

Level 30: Help the mouse to get the cheese

Move the mouse downwards (out of the maze), then guide it over to the cheese around the entire maze.

Level 31: How many stars would you like to rate for this game

Again, a matching puzzle – solve it!

The hamburger is identical to the one that we first had to make: bun, meat, tomatoes, salad, cheese, bun.

Level 34: Help the dog to lift the weight

Again, do what you did last time: using two fingers, quickly tap the buttons to the bottom left and right of the screen.

Level 36 was the fridge one again. It seems that we’ve entered a loop (or that those were all the levels that the game had and it’s now repeating them). At this point, I stopped playing as it makes no sense to play the same thing over and over again, even though the game itself was fun.

Hopefully it was very useful for you as well – all the answers from Brain IQ, the iOS mobile game are here.