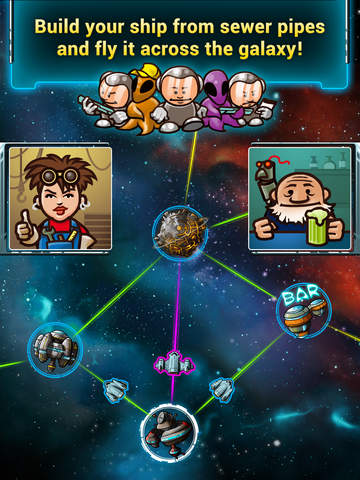 Earlier this year a really good adaptation of the board game Galaxy Trucker has been made available on the App Store for iPad. As the original game is one of the best board games available, it’s not surprising to see that the iOS adaptation is just as good.

If you don’t own an iPad but still want to play this excellent game, you will be happy to know that Galaxy Trucker is now finally available for iPhone. The new version of the game comes with all the features of the iPad one so you will be getting the full Galaxy Trucker experience.

On a related note, Galaxy Trucker iPad has also been updated today. Among the new features introduced by the update are in-game chat and the ability to reserve slots for players during multiplayer sessions.

In Galaxy Trucker players will have to build their own truck with different parts. Once the truck is ready to go, players will be exploring the universe and see if their truck is good enough to survive encounters with other players.

Galaxy Trucker is now available for purchase on the App Store for iPad and iPhone. Check out the game if you like board games, Galaxy Truckers will not disappoint you.