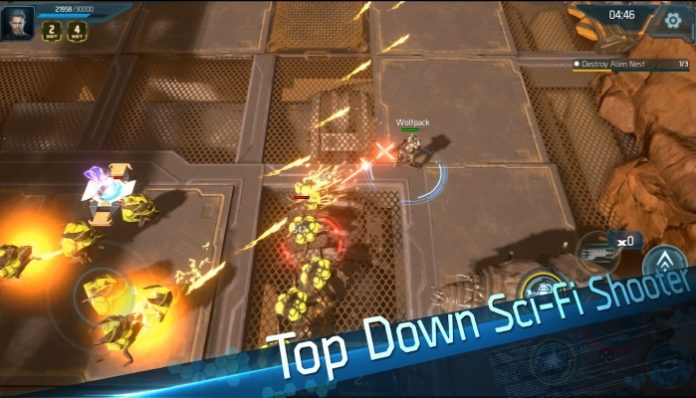 The Galactic Alliance is in dire need of help. The frontier is constantly expanding but the Alliance needs soldiers willing to take out hostile alien parasites for the advancement of humanity. Three mercenaries band together to fight the alien horde, but they are not in it for the Alliance – they just want to be paid.

Enter Gigantic X, a fast-paced top-down action shooter! Take down alien threats with a variety of skills and guns. Choose from the three mercenaries, each with their own unique weapons and abilities, and head out to kick some alien butt!

Players will travel across the galaxy hunting various monsters in different locales. The galaxy has it all: ice planets, desert planets, planets made out of nothing but technology, and so forth. Gigantic X features detailed environments, and even more detailed bugs.

The aliens in Gigantic X are no jokes. These big baddies will stop at nothing to see you dead, so be prepared for high-octane bullet-dodging battles where the difference between life and death can happen in a split second. Your reflexes will be put to the ultimate test!

And be sure to gear up! Gigantic X features an expansive loot system, so players will be able to customize their hero in whichever ways they wish. There are plenty of weapons to choose from as well!

And if things are still too tough, go ahead and call for reinforcement: Gigantic X feature real-time multiplayer co-op! Bring in some friends to fight the alien menace!

Gigantic X is scheduled for launch on July 29, 2019, on the App Store and Google Play Store.