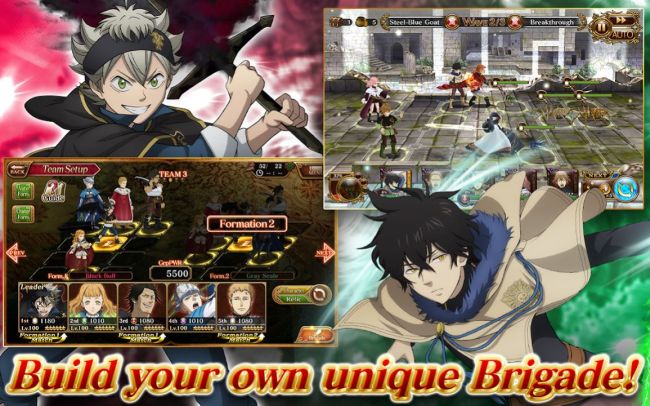 In today’s article we are going to cover all of the Black Clover Phantom Knights tips and cheats that we have gathered so far and share them with you into a complete game guide which will tell you everything that you need to know about the game!

So if you’ve been a fan of the Black Clover series, then you’ve probably been eagerly waiting for the game! And if that is the case, then you probably know a lot of what is about to happen and how the story will unfold – or at least you can take a guess!

And that is exactly why I will not detail on that – instead, in today’s guide we will focus on all the upgrades you can make and all the ways that you can get stronger and challenge everything!

But enough wasting time – let’s dive into what you came here for, the Black Clover Phantom Knights tips and tricks right here below!

What character to roll for at start?

When you start into the game, you will be faced with your very first gacha of the game, which gives you 99 rerolls, all in hope of you finding a good character to add to your team. Well, while this is happening, you probably haven’t even had any clue as to what can be good or what your team might need!

And that is exactly what I am going to tell you right now – basically, before the game even begins, you have to choose one of your first character out of the 99 pools. There is only one character that I really urge you to go for, because of its sheer capacity of keeping everyone alive while also being fairly useful damage wise!

And that is, Mimosa!

Try to reroll for Mimosa, which is a 5 star Healer. There are other good characters, such as Yami and Mars, but the very best one in my opinion would be one which is able to carry any heroes through the early battles of the game and still be viable end game!

To get to this, all that you need to do is select to reroll as many times as you can, because it might not come in the first couple of tries, but eventually, out of all the 99 pulls, you will manage to get her!

Set up your team formation

The team formation is almost as important as the heroes themselves, because it can really make or break your game! The team should be formed something like this to really be successful:

– Have one good tank in the front line – here, I recommend that you get Mars because it’s a very good hero which has pretty good HP and defense.

– Have a good healer in the back line – Mimosa is great because she has some of the best Healer abilities in the game, and the ideal place for any healer should be at the back.

Place the characters yourself

While you are forming a team, the game has the auto form option which will automatically place the best heroes that you have on the team, however the game wants. Well, I suggest that you don’t listen to this always and instead try to place the heroes however you think is better.

That is because sometimes the best thing you can do is take the lead and be confident that the way you form the team is better. Sometimes the game will place some other heroes in the front, and because some of them are not as good tanks as others, they might end up dying and thus wasting a hero slot!

So just make sure that you follow these guidelines:

– Tanks go in the front line

– Damage dealers go in the middle or back line

– Healers go in the back line (sometimes in the middle too)

Always put the strongest heroes on the team

While you might have your own favorite characters from the series acquired in game, sometimes they might not be the best in battle! That is exactly why you should make sure that you always try to go for 5 star heroes, or at least 4 star, because their stats are better!

Also, make sure that your team has some of the best heroes on the battlefield, otherwise you’re kinda losing damage and sooner or later you will notice that it would’ve been better if you just saved your resources and invested them into 5 star heroes!

Use your characters’ abilities wisely

While there are some battles which can be won fairly easy by using the Auto option, which automatically uses your skills whenever they become available, some others will be much more difficult, hence why I suggest that you cast the skills yourself.

Because there will be pretty long cooldowns between skills, I suggest that you only use them when you need to and cast them manually because it is much better for the important battles!

There are several gachas in the game which will probably end up with you having your favorite heroes before you even realize it – and if you don’t want to waste your Black Jewels on some summons that will not get you anywhere, then let me tell you which gachas you should keep an eye on:

This one is a limited event, and you should do it every single time when it is available. From this you have a higher chance to get Mars, which is the tank that I’ve been telling you about before! Just make sure that you summon every day for the duration of the event!

This one will be a pretty good money sink, but if you want Black Asta it will give it to you guaranteed after spending a total of 16200 Black Jewels (because the Step Up means 7 steps total!). I consider it to be a good gacha, unless you get Black Asta from the normal 11 gacha or something much cheaper than that – then there will be no point continuing on!

This one is definitely decent, but I wouldn’t bet my money on it as it works the same way as the Black Asta step up.

This gacha is definitely good if you want a free 5 star character for the total of 6200 Black Jewels. The step up gacha here has only 3 steps, and each one gives you: 5 summons for 1200 Jewels, 8 summons for 2400 Jewels and 11 summons for 3600 Jewels with a guaranteed 5 star hero inside!

This is the one I really suggest that you do if you want a random 5 star hero!

The summon here has increased chances of giving you a 5 star Captain character, so if you want to get Yami, this can be a good gacha for you. Just make sure that you either use the tickets that you get or the 11 summon for 3600 Black Jewels!

I wouldn’t recommend even bothering with this, as it is only mages and you will get guaranteed a 4 star mage from 11 summons. Well, there are chances of getting 5 star heroes too, but not that great – so unless you want to give it a try, then I don’t recommend it! If you want a mage you can just wait until it gets a featured summon with 0.500% drop rate.

After you’ve acquired quite a few heroes, you will be able to start making them stronger! Well, since you already have at least 1 star (that, if you got one as you should have from the beginner 99 gacha/reroll), then you should start by upgrading that one first!

It’s always best to boost your strongest heroes first, and then move on to the next ones because that way you will not waste any points!

In order to upgrade your heroes, just go over to the Brigade section in the main game interface and there u can tap on the heroes which have the Enhance text next to them – that means that upgrades are available for these heroes!

Once you selected the hero that you want to upgrade, just tap on the stats that you want to give to that hero and then select Enhance. Confirm your selection, make sure that everything is in order and press OK. Keep on enhancing and upgrading your heroes and they will slowly gain extra stats and their overall power will increase, along with your team’s!

Each one of the stages will give you a first time clear reward which consists of Black Jewels, so it’s super important that if you try to get more heroes, you try to also acquire as many Jewels as possible because they will help you summon more!

Whenever you are stuck and cannot progress further, then I suggest that you review your team, try out different strategies and use the skills yourself – not wait for the game to automatically cast them whenever it feels like it’s right!

Do in game events

There will be plenty of in game events, and if they are not running at the moment, then in the very near future they will! So that’s why you should always check out if there is any new in game events that you can take part in, because from them you might even get some good Relics for your heroes!

So don’t miss out on them and no matter what, try to take part in everything and do all the tasks that you get, especially the daily ones!

Daily Missions are a must

Every single day you will receive new tasks which will expire in several hours. Since the tasks are time limited, you should try to complete them as best as you can because the rewards can be super useful!

So make sure that if you can’t complete all of the daily missions, then you focus on some of the most important ones which give the best rewards!

And now, another type of rewards which you can get in game are the daily login rewards – some of my favorites! That is, because among these rewards (which there are a ton of in the game) you will get free Black Jewels which are used to make plenty of summons!

So if you ever find yourself stuck, unable to progress further and without a very powerful team, just make sure that you log into the game every day to claim the rewards (you don’t really have to do anything else!) and then you wait until you have enough stuff to get stronger!

These would be all of our Black Clover Phantom Knights tips and tricks that we have for you right now! Do you know some more useful game tips or have some strategies that you would like to share with us? Leave them down in the comments section below!