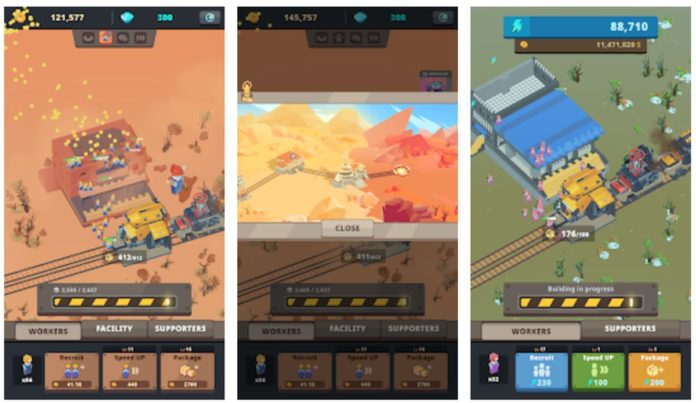 As a fan of relaxing idle games, I was extremely happy to discover Billion Builders. It fits the bill perfectly: it can be played in short bursts throughout the day, it is relaxing and cute and at the same time not too challenging. The perfect game for me.

Today I am here to share with you a complete Billion Builders guide: a set of tips, tricks and cheats to help you keep on building, unlock all new content and learn what that content does. Because, yes, in some instances, you can be left with a few questions regarding the game’s mechanics.

With all these in mind, let’s jump straight into our guide and check out some Billion Builders tips below!

This is the main thing that you will do in the game, whenever you play it: buy one of the three upgrades available for coins in the game. These are:

As you buy more of each upgrades, their price increases and being able to optimize buying is the key to having a perfectly oiled machine that optimizes income gains, worker speed and never lets anything to go to waste.

Balance is key and finding that is the biggest challenge here. But it’s also relatively easy to obtain.

Simply purchase new upgrades based on how the packages are doing: if the numbers are constantly toward the top limit, you should invest in recruiting new workers and speed up boosts. If they keep queuing near the train, buy more package upgrades.

The boosts you can activate in the game will influence this a bit but we will talk about it below. Also, have in mind that whenever you return to the game after being offline for a while, the package numbers will be 0 so they will need a bit of time to fill up.

One of the best and easiest ways for you to speed up progress by a ton and get those areas completed ASAP is to watch ads to activate various boosts in the game. Here are your options, which will randomly appear as you play:

Out of all these boosts, I consider the Super Builder to be the best as he offers the biggest boost possible.

On the other end of the usefulness scale we have the speed boost: usually, the boost itself will be so great that you will run out of packages for your workers.

As a result, most won’t really benefit you from the boost and at best force you to invest in Package upgrades which will be nothing but a waste of money for the rest of the game.

In other words, stay away from the Speed Boost and only accept the other three whenever they pop up or when you feel like (as they pop up pretty often, truth be told).

What are the Facility Upgrades?

As you complete more buildings, you unlock new things to buy in Billion Builders. The first one is the Facility tab, with three options, all available for purchase for Diamonds (the premium currency in the game).

While the game itself doesn’t give you any actual details on the effects of each of the upgrades, we can tell you what they do (or what they seem to be doing, since it’s difficult to know for sure):

These all cost a ton of money and, just like with the regular upgrades, prices increase with each new purchase. So you should invest your money carefully.

I personally recommend getting one or two of the Offline Earnings upgrades because you will spend more time away from the game than actively playing it, so it is useful on the long term.

The Tier Up seems to be extremely useful – each new upgrade we bought seemed to speed up the builders quite a bit, making it easier to complete levels and progress through the game.

What are the Supporters Upgrades?

After finishing the third building (or is it the fourth?) you unlock the Supporters tab with three more things to spend your Diamonds on.

Unlike the Facility upgrades, though, it’s a bit more difficult to notice what each of these things does and the game offers absolutely no explanations on the matter.

Here is what us here at Touch Tap Play think each of these buyable upgrades does:

Considering their price and especially the facts that you don’t really know what kind of effect they have, I would recommend you to stay away from the Supporters tab and only invest your Diamonds in the Facility Upgrades.

If there is such a moment when I would say that you definitely have to watch a video ad, that is when you complete a building. Whenever you do so, you will triple your earnings!

And since we’re talking about diamonds here – the premium currency in the game that can only be bought with real life money otherwise – that is indeed great value and an offer you shouldn’t say no to.

How to get rid of the ads?

If you enjoy the game, you have the option to disable the ads by purchasing the Pro Licenses from the Shop. This way, you will say thank you to the developers for creating a game you love, but also get rid of the annoying ads.

However, if you don’t afford to make one or two purchases, Billion Builders is created to run without ads as well. All you have to do is quit the game and put your phone into airplane mode (or at least disable WiFi and/or mobile internet).

The developers were kind enough to offer this option too – and if you do it, you will no longer be bombarded with ads. At the same time, you won’t have the optional benefits that come with them – like tripling your diamond income when you complete a building or activating the various boost.

But you know that you have your options here and you will surely pick the right one for you. Do have in mind that it’s actually these ads (or the IAPs you can buy) that pay the game devs for their hard work!

These would be our Billion Builders tips and tricks. If you have additional advice – or questions – don’t hesitate to comment below and let us know.