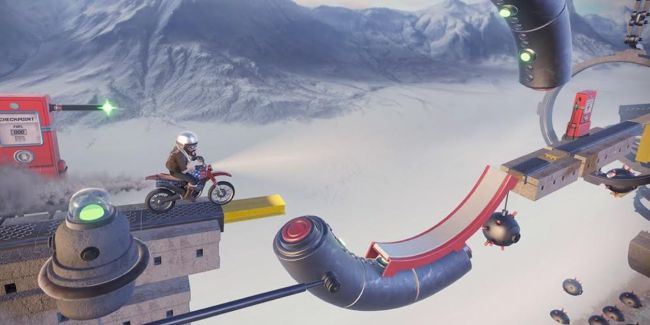 Have you ever wondered what would have happened if Evel Knevel joined forces with Monty Python’s Flying Circus? No? Well, that’s most likely the notion that ran through the minds of developer Mountain Sheep when it conceived its mad-cap motorcycle platformer, Bike Baron, which launched way back in 2011.

Its mix of side scrolling platforming, obstacle-filled stages, and ludicrous stunts proved to be a huge success, topping the app stores in over 89 countries. Nearly 10 years on, Mountain Sheep has teamed up with publisher Cornfox Brothers to bring fans its long-awaited sequel, Bike Baron 2, which just launched worldwide for iOS.

Bike Baron 2 builds upon the same gravity-defying mechanics which worked so well in the first game by enhancing its in-game physics, adding cool new settings, brand new tricks, and even wackier obstacles. Over 50 stages are included at launch, each replete with suitably zany obstacles set against a range of epic backdrops. The fast-paced gameplay and brilliantly designed mechanics offer plenty of replayability where a strange sense of satisfaction can be enjoyed with every epic crash.

If you’d like to take a wild ride and experience the pandemonium of Bike Baron 2 for yourself, you can find it available to download from the App Store right now for $6.99.