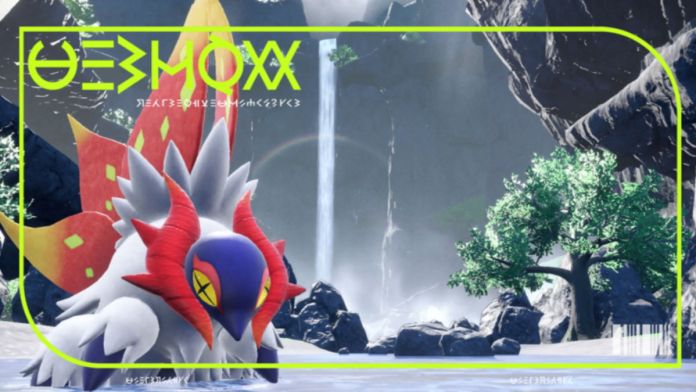 Slither Wing is a dual-type Bug and Fighting primal Paradox Pokémon that hails from ancient times. It seems to be one of the earliest forms of Volcarona, and it contains hidden powers. The Paradox Pokémon are some of the strongest Pokémon you can catch in the whole game, and today we’re going to show you the best Slither Wing moveset in Pokémon Scarlet & Violet.

Similar to the other Paradox Pokémon, Slither Wing is packing some high stats. Here are its base stats, according to Bulbapedia:

Slither Wing is lacking a bit in defense with its average HP and Def, but its massive Atk stat ensures that it can take down some Pokémon before it’s knocked out.

The primal Paradox Pokémon all share the same ability: Protosynthesis, which plays a key part in how you build them. Protosynthesis activates when there is harsh sunlight, and it boosts the Pokémon’s highest stat by 30%, or by 50% if it’s Speed.

The best moveset for any given Pokémon will always be a bit subjective, so we’re going to list some of the best options for moves, then show some example builds. Let’s start with Bug moves!

Learned at level 84, Leech Life is Slither Wing’s best Bug-type move. It’s a physical move that attacks with 80 base power and 100% accuracy, and it recovers HP for the user equal to half the damage inflicted.

Leech Life is great not only because it does decent damage, but also because it heals Slither Wing. Since Slither Wing’s defense stats aren’t too great, it’ll need some help with staying on the battlefield for longer.

A good alternative is Lunge, learned at level 42. Lunge is a physical move that attacks with 80 base power and 100% accuracy, and it lowers the target’s Atk stat by one stage. This is good since Slither Wing has less Def than it does Sp. Def.

Through TM060, Slither Wing can learn U-turn, which deals 70 base power damage and immediately switches out Slither Wing for another Pokémon. This can be helpful if you prefer hit-and-run tactics.

Superpower, learned at level 49, is a physical move that attacks with 120 base power and 100% accuracy. Superpower deals massive damage, but it also lowers the user’s Atk and Def by one stage. It also has a low max PP of 5, so you’ll need to use it when it counts.

Low Sweep, learned at level 28, is another physical Fighting-type move that attacks with 65 base power and 100% accuracy, and it lowers the target’s Speed by one stage. This is helpful since Slither Wing’s Speed isn’t too high.

Sunny Day shines harsh sunlight upon the battlefield. This is needed for Slither Wing’s ability, Protosynthesis, to activate, which increases its highest stat even further. This turns Slither Wing into a powerful physical attacker.

Morning Sun recovers half of the user’s HP when used during harsh sunlight. This can make Slither Wing a little more self-sustainable.

Bulk Up increases the user’s Atk and Def by one stage. This can be used to counteract the negative effects caused by using Superpower.

Poison Powder and Stun Spore can inflict poison and paralysis on your target, respectively. Although these are helpful, their low base accuracy of 75% makes them unreliable.

Now that we’ve gone over some of the best moves for Slither Wing, we’ll talk about potential movesets. Here are some example movesets, but feel free to change moves around as you see fit.

Attack your foes with Leech Life and Superpower, and keep Sunny Day up so that Slither Wing is powered up. Offset the stat drops from Superpower with Bulk Up, and you should be able to maintain good stats.

Alternatively, you can take a second attack move in case you run out of PP on your other moves. You can also take Morning Sun for some healing if you’re getting attacked too much.

That concludes our guide on the best moveset for Slither Wing in Pokémon Scarlet & Violet. What are some of your favorite moves for Slither Wing? Let us know in the comments below!