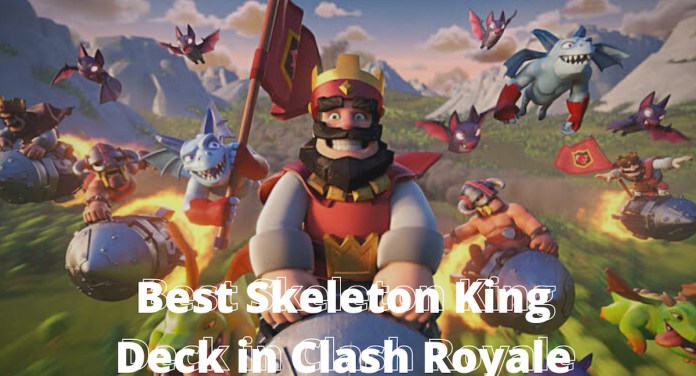 The highly acclaimed Clash Royale now includes a multiplayer for players to enjoy. The developers also added that the multiplayer feature comes with real-time matches that players can play using the Royales.

In Clash Royale, players must try to collect and upgrade several different types of cards featuring The CoC troops as well as its defences. The game inspires players to rely on building strong and powerful deck build that will lead them to victory.

It’s a pretty simple concept but for starters who aren’t exactly familiar with the game, they’ll need a guide to be able to know and detect the best Skeleton King Decks in Clash Royale, and that’s why we’re here for you.

Since one of th game’s best and most reliable deck build is built around the Skeleton King, in this article, we’ll be listing the best Skeleton decks in Clash Royale to help you consider and set up the best back up cards and troops in order to build a powerful deck. So without further ado, let’s dive in!

Most players will probably seek nothing better than a high win-rate deck, and according to RoyaleAPI, the best high win-rate Skeleton King Deck you can get in Clash Royale are: Electro Giant, Bomber, Goblin Cage, Tornado, Inferno Dragon, Mother Witch and Lightening.

This is a powerful deck that revolves mainly around PEKKA (Perfectly Enraged Knight Killer of Assassins). If you want to get your hands on this deck and give it a try, you’ll need to have the Bandit, Log, Magic Archer, Barbarian Barrel, Fireball, Electro Wizard and if course, PEKKA.

What makes this deck very interesting and powerful than most is that it focuses on the formidable PEKKA, he can deal consistent damage against whatever your opponent may attack you with. As for the Log and Fireball, they assist in helping you deal with any opposing Skeleton King and they can help you wipe out their spawned swarms.

This is another powerful Skeleton King variant that comes with Rage,Sparky, Zap, Electro Wizard, Minions, Goblin Giant and the strong Mini PEKKA.

Similar to the main PEKKA Skeleton King Deck, where you rely a lot on the PEKKA, so does this deck rely and focuses more on the Mini PEKKA. However, the Mini PEKKA isn’t the only one that can deal high damage as the Sparky is able to deal far more AoE (Area of Effect) damage against opponent.

The Goblin Giant is also commendable in this list as it is able to get into the towers and deal some heavy damage as well.

That’s it from us on the best Skeleton King Deck that you can use in Clash Royale and we hope this brief guide has been helpful to you in battling players in the game’s real-time multiplayer matches.