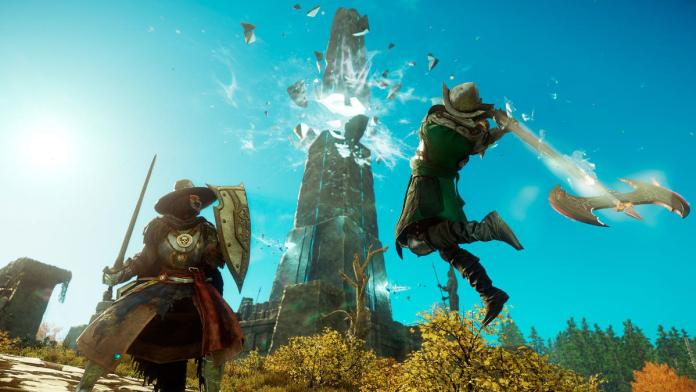 In New World, there are fourteen different weapon types that players can wield into battle. Each weapon has its own unique play style, so you’ve got to find the weapon that fits you just right. The Sword and Shield is a weapon that is balanced between offense and defense, and you can improve either aspect. Here are the best New World Sword and Shield DPS builds listed!

The Sword and Shield, as stated earlier, is a weapon set that is designed around balanced offense and defense. There are two mastery trees for the Sword and Shield: Swordmaster, which focuses on improving offense, and Defender, which increases your tanking abilities.

Most players who pick up the Sword and Shield do it mainly for the Defender tree, as it allows them to become a main tank for the party. That isn’t to say that the Swordmaster tree isn’t viable, as it very much is, but for endgame content some players might laugh at the idea of Sword and Shield DPS.

Still, if you love how the Sword and Shield handles and want to do decent damage, then we’ll help you figure out the best build for your situation.

For your three active skills, you’re going to take all three Swordmaster skills. We’ll go over each one in detail and explain how they work in your build.

Let’s start with the first basic skill, Whirling Blade. You spin your sword around yourself rapidly, dealing 145% weapon damage to all targeted within 2 meters of you. The damage isn’t the best, but the first upgrade Opportunity gives it a 5% rend, which means that all affected targets have their defenses decreased by 5% for 10 seconds.

Reverse Stab hits your opponent for 175% weapon damage, while also staggering them. This is your hardest hitting skill, and you only want to use this when you have all your self-buffs active and debuffs inflicted on your target.

The two upgrades are situational, but overall helpful. Unstoppable Stab grants you grit during Reverse Stab, to ensure you don’t get interrupted during your strongest attack. Tactician reduces the cooldowns of your other Sword and Shield skills by 25%, which can be great for keeping the pressure on your foes.

Leaping Strike is the last Swordmaster active skill, and it causes you to thrust forward a short distance, dealing 150% weapon damage. You’ll want to take both Final Strike and Cowardly Punishment, as Leaping Strike will then do more damage to targets below 50% health and inflict them with a 30% slow, opening them up to further punishment.

While active skills are obviously very important, most of your build’s strategy depends on your passive skill choices. Here, we’ll list all the essential passive skills for you to consider, so that you can theory craft about your build.

The first passive you want to pick up is Empowered Stab, which is the cornerstone of the Sword and Shield DPS build. Landing a heavy attack will grant you a 30% empower for 5 seconds, increasing your overall damage.

Achilles’ Heel makes the final hit in your light attack combo inflict a 20% slow for 2 seconds. This coupled with Leaping Strike will ensure that your target stays where you want them to be, and opens them up to more damage.

Precision increases your critical strike chance by 10%. This is a no-brainer choice.

Freeing Justice removes a single debuff from yourself whenever you land a heavy attack. Since you’ll always be taking Empowered Stab, this can be helpful for shaking off anything your enemies throw at you.

Counter Attack gives you a 5 second 3% empower buff every time you block an attack, and it stacks up to five times, for a max of 15% empower. This is the most important passive to grab if you’re going with the shield build, which we’ll list below.

Opportunist increases your damage against slowed targets by 10%. With Achilles’ Heel and Leaping Strike, you’ve got lots of ways to slow down your enemies.

Confidence gives you a 15% damage boost if your health is full. As long as you keep yourself topped off, which is easy to do with a shield, you can benefit from this passive often.

Critical Precision gives you 20% haste for 5 seconds upon landing a critical strike. This can help you keep up with your opponents that try to keep their distance from you.

Leadership, the final passive skill in the Swordmaster mastery tree, grants a flat 10% damage boost to your entire party (Including yourself) as long as you’re wielding the Sword and Shield. Needless to say, you should always take this skill.

Sturdy Grip, the first passive in the Defender mastery tree, reduces stamina damage by 15% whenever you block a melee attack. High Grip does the same thing, but for ranged attacks instead. You should grab these if you plan on taking Counter Attack.

One With The Shield reduces your Sword and Shield cooldowns by 1% every time you block anything. This can be useful to keep the pressure on with your sword skills.

Related | How to Get New Egyptian Gods Items in New World

Your shield is merely a distraction with this build, as you’ll be going all in with your sword skills. With all three active skills fully upgraded, they’ll be off cooldown pretty often. You can open with Leaping Strike to inflict the slow, charge up a heavy attack to activate Empowered Stab, then follow-up with Whirling Blade for the rend debuff. This should give you the following buffs:

With Empowered Stab active and your target is slowed and rended, hit them with Reverse Stab to deal massive damage. Use another heavy attack to keep Empowered Stab up, then keep up the pressure with light attack combos to inflict slow. Stay on your opponent and finish them off with another Reverse Stab or Leaping Strike.

This build is for the more defense-oriented players. Your strategy with this build is still centered around empowering yourself and using Reverse Stab on slowed targets for big damage, but you get there a little differently. You’ll still be using Empowering Stab, but you can get even more stacks of empower with Counter Attack.

Counter Attack gives you a 3% empower buff that stacks up to five times every time you block an attack. You’ll take both Sturdy and High Grip to keep your stamina up while you block attacks, then once you have max stacks, pull off a heavy attack for maximum empower. Mobility is there so that you can stay slightly more mobile while blocking.

From there, the strategy is similar to the other build—utilize Whirling Sword blade for the rend debuff, stack empower buffs, and go for the Reverse Stab. If you’re having trouble landing heavy attacks, don’t hesitate to just use your light attack combo for quick damage. With Final Blow, it’ll be doing more damage, and your targets will be slowed.

That concludes our guide on some of the best New World Sword and Shield DPS builds. Don’t feel like these builds are set in stone—feel free to experiment and change skills around that fit your play style better. If you’ve got a great DPS build you’d like to share, let us know in the comments below!