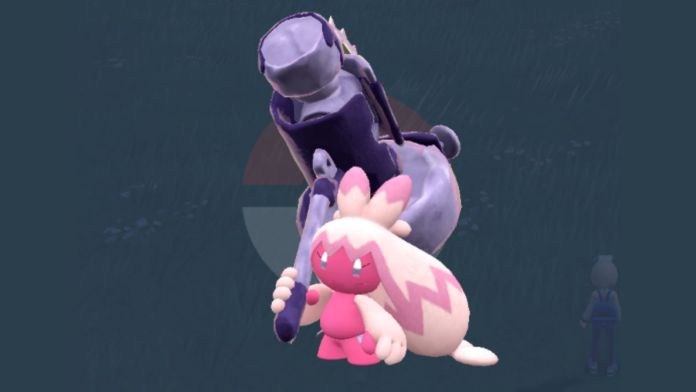 Tinkaton is the final evolution of the Tinkatink line, a dual-type Steel and Fairy Pokémon. Tinkaton has some pretty balanced base stats all around, as you can see from Bulbapedia’s data chart.

Tinkaton isn’t particularly packing any extreme power in its moderate attack stats, but it makes up for it with high Def and Sp. Def. With good HP, Tinkaton can soak up physical attacks pretty well, but is exceptional at tanking special attacks.

Because Tinkaton’s Atk and Sp. Atk stats aren’t too far apart, that means that it can take either physical or special offensive moves and the difference shouldn’t be too noticeable.

So, let’s get started with some of Tinkaton’s best moves. Of course, we have to mention its signature move, Gigaton Hammer, first. Tinkaton learns Gigaton Hammer as soon as it evolves from Tinkatuff.

Gigaton Hammer is a powerful Steel-type physical move that has a whopping 160 base power. Gigaton Hammer is Tinkaton’s strongest Steel move, so you’ll want to take it to bring on the pain for types that are weak against Steel.

The only downside to Gigaton Hammer is that its max PP is 5, and it cannot be used twice in a row, under normal circumstances. Though, with its immense base power, it should be able to one-shot most Pokémon.

Both of these moves are good backup Steel moves in case you run out of PP for Gigaton Hammer. Flash Cannon is pretty reliable with its 100 accuracy, but since it lowers Sp. Def and not regular Def, it doesn’t pair as well with Gigaton Hammer.

On the other hand, Metal Claw can raise Tinkaton’s Atk, which goes very well with Gigaton Hammer. However, the chance is pretty low and Metal Claw can miss on its own, though it shouldn’t happen too frequently.

An alternative move is Heavy Slam, a Steel-type physical move. This move deals more damage the heavier the user is compared to its target, and although Tinkaton looks tiny, it weighs roughly 250 lbs due to its massive hammer. You’ll need to use TM121 to learn this, though.

Another alternative is Steel Beam, a Steel-type special move. With a base power of 140, 95 accuracy, and 5 max PP, it’s very similar to Gigaton Hammer is terms of raw power. Learn the move from TM170.

Tinkaton has a few choices to make when it comes to Fairy-type moves. Fairy Wind is something it’ll learn early on, and it’s a decent choice but should be replaced with something else later on, due to its low base power of 40.

The next Fairy-type move Tinkaton will learn is Draining Kiss. You should replace Fairy Wind with Draining Kiss, as it deals more damage and absorbs HP.

The best Fairy-type move has to be Play Rough. With a base power of 90 and it being the only physical Fairy-type move Tinkaton can learn, it’s easily the best choice. Although it has an accuracy of 90, it’s still worth it.

Now that you’ve got your baseline attack moves, you can use your remaining slots for auxiliary moves. Here are some of the better options for Tinkaton.

Now that we’ve covered most of Tinkaton’s important moves, we can show you an example moveset. Please keep in mind that this moveset is not absolute, so feel free to modify it however you see fit!