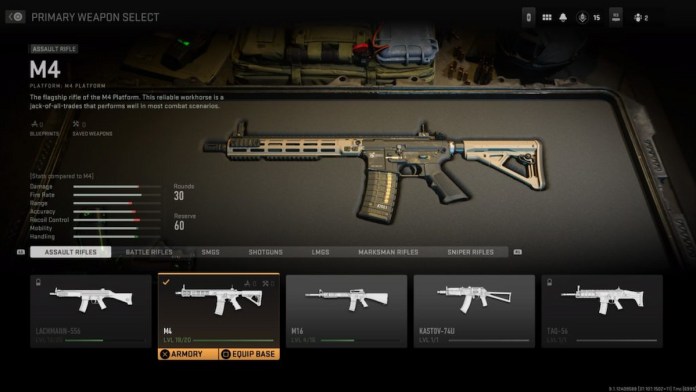 Although it’s still in Open Beta, Call of Duty Modern Warfare 2 has become one of the most talked-about games ever since it was announced. Only a few amounts of players are lucky enough to try out the game’s beta as well as test the progression system.

There’s a lot to enjoy from the beta as you can check out the game’s weapons, attachments and even cosmetics rewards which will unlock as they reach new ranks in the game. So in this article, we’ll be showing you the best M4 Loadout in COD MW2.

Call of Duty games are known to offer modern-era weapons that players will enjoy, such as the M4 assault rifle that rarely disappoints on the battlefield unless you run out of bullets.

In the official in-game description, Activation describes the M4 in Modern Warfare 2 as a “reliable workhorse” that is also a “jack of all trades that perform well in most combat scenarios.” There is no better way of describing the rifle which has become a popular weapon in the majority of today’s FPS games.

And while it’s not as flashy-looking as some of the other weapons in Modern Warfare 2, the M4 still gets the job done in different situations. Thanks to the Gunsmith, you can set it up how you want and storm into battle.

This is the best set you can currently equip in the game’s beta, and it’ll keep you in the fight long enough to win it. The above attachments will increase the M4’s multiple facets of kits such as its damage, recoil control, and range, but suffers slightly in the handling department.