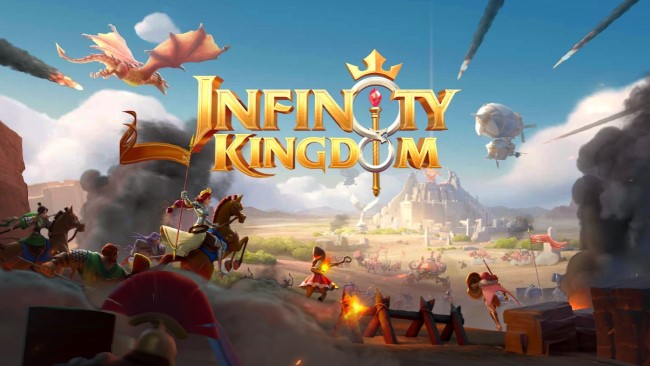 Infinity Kingdom is a cartoon-style free massively multiplayer online (MMO) video game, developed and published by YOUZU(SINGAPORE)PTE.LTD, the same company responsible for other well known titles such as “Forsaken World: Gods and Demons”, “Saint Seiya Awakening: Knights of the Zodiac” and “Dynasty Scrolls” among others.

Released in December of 2020 for Android, and in January of 2021 for iOS devices, the game has already over a million downloads on Google Play Store alone.

In Infinity Kingdom, players take upon the role of a resourceful Lord who must defend the land of Norheim against the gnomes, while at the same time they protect themselves from other invading players.

The “Sage Council” grants Lords the supreme right to summon the “Immortals” at the “Hall of Immortals” via “Philosopher’s Stone”.

Cleopatra, Merlin, Robin Hood, Julius Caesar and many more, they are all ready to fight for their Lords with their immensely powerful abilities.

While you are free to invest in any hero that you like of course, it would be much easier to spend your resources on the heroes that you really want.

Do a bit of research, figure out what kind of team you would like to play and what heroes are the better fit for it.

Especially if you are planning to stay F2P, it would make your life much easier to keep your resources and spend them only on the units that you really want.

When you start the game, you don’t want to start switching troops and spending your resources left and right. Stick with one troop and boost it however you can. It’s going to help you complete much of games content easily.

In this article we will take a look at all the currently available Immortals in Infinity Kingdom and rank them in tiers, based on not only their abilities, but we will also take into consideration their synergies.

The units in their respective tiers are placed alphabetically. It doesn’t mean that one is stronger than the other.

So, without any further ado, let’s get right into it.

What makes these Immortals S tier you might be wondering? Well, here’s the answer. Immortals of this tier are powerful from the moment you acquire them. Naturally the more you will upgrade them the better, but even with one skill unlocked they are still viable and they are going to work with pretty much any units/troops you have. With that being said, you SHOULD try to upgrade them once you get them.

Under the right conditions, some of the units in this tier can be considered S+ Immortals. Then why are in this tier instead you might be wondering? That’s because these units, if they are not in their ideal situations they fall off compared to the S tier ones. They are dedicated to a specific type of troops for the most part. With that being said, if you can put them in the right team formation, go for it. They won’t let you down.

If you are planning on staying an F2P player, the units of this tier can be very solid choices moving forward. They need specific units to become highly effective, but they are easily obtainable and you can upgrade them rather fast.

Units of this tier can be useful in the early game but there’s a reason why you will almost never see them in the late game. That’s because they fall off in terms of power. Don’t spend a lot of resources in these units unless you have no other choice.

Units of this tier are very similar to Tier C units but… weaker. They may be somewhat useful early game but you want to replace them with better units as soon as possible. Goes without saying that you shouldn’t spend any of your resources on them.

Tier E… What else is there to say about these units? Just don’t bother with them. Obviously do not invest in units of this tier, that goes without saying. If you have absolutely no other choice but to use them, then do it and swap them ASAP.

That’s all for our “Best Immortals in Infinity Kingdom” article. If you have any questions or there’s something that you would like us to add, let us know in the comment section down below!