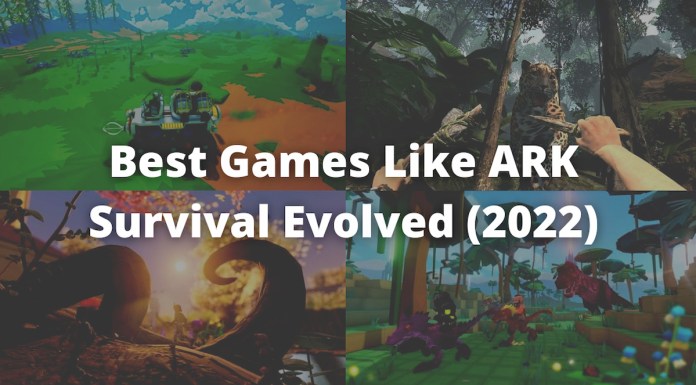 No matter where you find yourself in the game, ARK’s terrific design cannot be overstated. From a wide selection of crafting materials and building tools to co-op and monster taming, ARK is a survival game that has it all.

So if you want more interesting titles like it, then here are the best ARK Survival Evolved games of 2022.

In this game, you play as the child of a failed scientist who gets shrunk down to the size of a pebble and must strive to survive in the backyard of their suburban home, which is a massive sandbox. You will have to scavenge for food, shelter and water to survive.

Other resources include weapons, armour and any necessary pieces of tools you can find to help you survive. Like many survival games out there, Grounded will see you explore many parts of the map and battle various types of enemies that roam around.

This is a game that lets you embark on a blocky adventure to uncover the secrets of a mysterious and dangerous island that’s ruled by dinosaurs. You can battle these dinosaurs or try to capture them as pets.

In addition, the island has unlimited resources scattered all over its forests, caves and underwater biomes, you simply need to explore and find them. The game also allows you to reshape terrains by adding or removing blocks and gradually completing quests that offer new challenges.

Although a lot of survival games like ARK Survival Evolved tend to centre on a single player’s quest to stay alive amidst the harsh conditions, Eco is a game that merges both time constraints and human greed into the mix.

When a meteor is on a collision course with your planet, you must work with other players to survive by researching and creating new technologies and hopefully save mankind from extinction. You must achieve this without destroying the environment as well because the game features a simulated ecosystem that’s inhabited by thousands of plants and animals.

Radiation Island is a comprehensive survival game that despite having been around for quite some time, still holds up in 2022. In this game, rather than worrying about dinosaurs or extreme temperatures, your primary concern is lethal radiation that you must figure out a way to survive against.

You must find supplies, stock up on masks, food and many other items. And similar to ARK Survival Evolved, Radiation Island’s map is composed of different environments inhabited by a host of enemies such as bears, mountain lions, zombies, wolves and others.

As one of the most played games in the world, Minecraft allows players to access a limitless amount of creative tools to make and design whatever they can think of. But outside the game’s creation mode, Minecraft is also a survival game that is very similar to ARK Survival Evolved.

The game’s survival mode sees you start on an empty piece of land surrounded by various resources and enemies who will attack you at night and if you’re not prepared, will kill you. Progression in Minecraft’s survival mode is measured by your ability to expand and strengthen your base while exploring the world and crafting new recipes either by playing alone or with friends.

Based on the popular Conan the Barbarian mythology, Conan Exiles is an open-world survival game that incorporates plenty of ARK Survival Evolved mechanics. And like many other survival games, you’re tasked with managing your character’s health, food and even water consumption.

You can also craft, equip items as well as build weapons with tools you find from scavenging. Since Conan the Barbarian is famous for battling monsters, you’ll be facing the likes of dinosaurs, and even dragons as well as other giant monsters that will take time and preparation to defeat.

This is a survival game with a simple but deceptive setup where you play as the only survivor of a plane crash and try to find your missing child in a strange environment. Things quickly got worse after mutated creatures, wooden structures and other dangerous objects begin to cross your path.

In terms of gameplay, The Forest is very similar to ARK Survival Evolved as it involves building shelter, gathering various resources from the wilderness and using some of those resources to create makeshift weapons. And like ARK, you can also play online multiplayer with friends.

For players who enjoy the PvP side of ARK Survival Evolved, then SCUM is a brutal game that throws the toughest and most dangerous criminals on a remote island where only the last man standing can survive.

In SCUM, you must battle alongside other players by overcoming a host of dangers like mutated animals, rogue military operatives and deadly machines. SCUM has a unique metabolism system where your character’s health and overall performance depend heavily on the macronutrient, vitamins and minerals you consume by eating.

Ever since its release, Astroneer has been loved and supported as one of the best survival games you can find and is similar to ARK Survival Evolved. It’s a quirky game that makes exploration and survival both fun and positive.

The game’s endearing visual style is enough to give it a try but there’s a lot more to Astroneer than that. It’s a survival game with many distinct features compared to other survival games out there, especially when it comes to crafting items.

This game starts by dropping players in a lush rainforest that’s teeming with danger from all angles. This time you won’t be battling dinosaurs or dragons but crocodiles along with other aggressive native tribes.

To stay alive, you’ll need to craft weapons and build shelters from the surrounding resources while also hunting for your next meal. Similar to ARK, Green Hell encourages risk and exploration which rewards extra materials, upgrades and little bits of lore that explains the story.