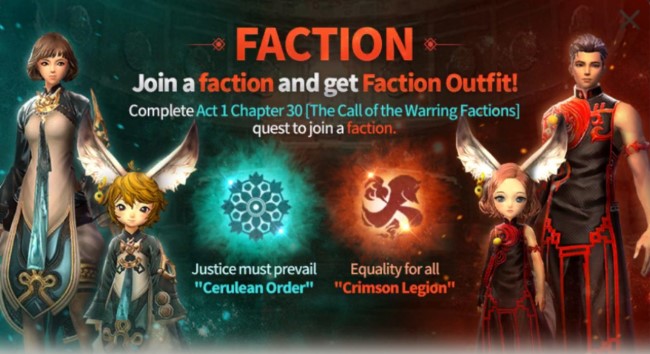 Blade & Soul Revolution, the mobile version of the classic Blade & Soul is now available for Android and iOS devices.

In this article we will take a look at Blade & Soul Revolution ‘Faction’ system, the pros and cons of choosing a side as well as how you can change it, if you regret your decision

Without any further ado, let’s get right into it.

There are two factions in Blade & Soul Revolution. Players can align with the Cerulean Order or Crimson Legion.

Cerulean Order – ‘The Defenders of Justice’, value order and structure above everything else, while Crimson Legion stands for equality for all.

Players have the choice to join one of the two main sides in Blade & Soul Revolution. Picking a faction will allow you to join cooperative activities and tasks every week with fellow players of your faction.

Once you join a faction, you become hostile to the opposite faction. You can defeat them in war zones to earn faction points that you can later trade for rewards.

One of Blade & Soul Revolution major PvP events, is the ‘Faction War’, which allows players to engage in large scale battles with the rest of the community.

There are few things to take into consideration when you are about to pick a faction. First of all, you can only join a Clan that is aligned with your Faction choice. That means, if you are a member of the Cerulean Order, you can’t join a Crimson Legion clan. If you are playing solo, that won’t affect your gameplay whatsoever, but if you are playing with a group of friends, you might want to pick the same faction.

Another thing that you should consider is the state of the server. Of course, not every server is the same but, in games like this, people tend to group up on one side, making the PvP events imbalanced. To give you an example, if 80% of the servers population is with Crimson Legion, you will find yourself outnumbered in pretty much every event.

On the flip side, If you are in the faction with less people, that means you can rank up faster and you can claim heroic items from the faction shop.

Changing Faction is very easy, all you have to do is to go Faction menu, tap on Faction Status and then select switch Faction.

To sum up, there’s no such thing as ‘best’ faction. Depends on the status of each server, as well as if you want to play with friends or solo like we’ve mentioned above.