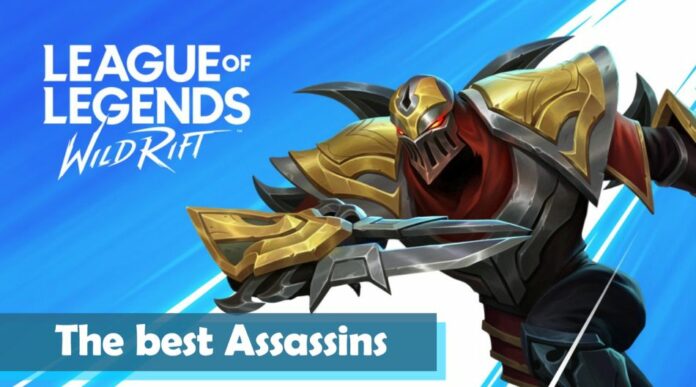 If you like taking your enemies by surprise and bursting them down in a couple of hits, then an assassin might just be the ideal champion for you in Wild Rift. In today’s article, we are going to check out the best assassin champions in League of Legends: Wild Rift and help you pick the best one for you, no matter if you’re a complete beginner or not.

The following assassins are not crazy difficult to play, but will require you to actually land their skill shots – otherwise, they will not be of much use in the game. I wouldn’t recommend playing an assassin in your very first game, until you’ve got a decent understanding of the game and their skills. So, without further ado, here the best assassins in League of Legends: Wild Rift:

– Ahri (she’s more like a mage assassin, not a 100% assassin – but if we count her as an “assassin” she is the easiest to play)

As you can see, assassins are not that easy to pull off. They are not the best beginner-friendly units, so you should try a marksman instead if you’re trying to just learn the game.

But there are some not-too-difficult assassins, which can deal some pretty good damage and provide the “carry” potential a team needs. Try to play the following champions after you’ve got a grasp of the game. These are some mid-difficulty assassins that can be really impactful:

The next assassins are some of the most difficult to play, but also deal amazing burst damage and can probably one-shot most squishy units in the game. Their skills are difficult to pull off, because they rely heavily on combos, positioning correctly, and taking advantage of every opportunity to take down the enemy (every time the enemy is out of position or low on HP).

The Best Assassins in League of Legends: Wild Rift

All of these assassins and almost-assassins (looking at you, Ahri) are good, but there are a few that really shine amongst them. If you want to climb games and rely on your own skill and champion for carrying, then I would really suggest learning to play one of the following champions, which are the absolute best assassins in League of Legends: Wild Rift:

Until they release more assassin champions, like Katarina, Rengar and Kha’Zix, these would be all the best assassins currently available in Wild Rift.

Make sure you check out all of our League of Legends: Wild Rift articles, where we share everything that we know about the game. And if there’s anything you would like to learn about the game or a specific champion, feel free to leave a comment down below and I’ll get back to you!