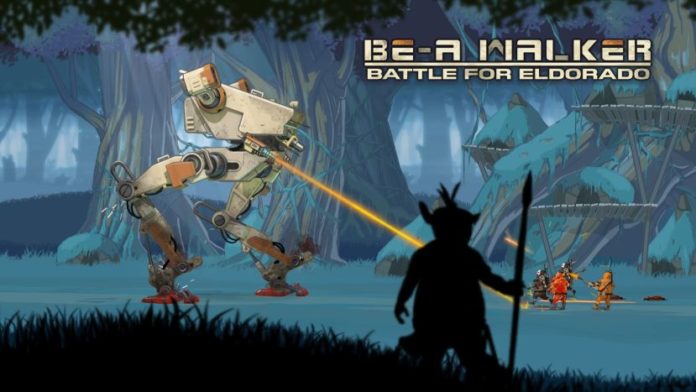 I am an old dude and I played my fair share of games when I was younger, so I remember a classic Amiga title simply called “Walker” – a game I loved like crazy.

With the release of BE-A Walker on mobile, the Nintendo Switch and basically all other platforms out there, I was happy to see an upgraded and much improved version of the classic game that I loved so much, but with a completely different approach and new gameplay elements to feel like something completely different.

BE-A Walker is a game where you arrive on planet Eldorado – a planet inhabited by savages armed with sticks and stones (mostly), savages who don’t really like the newly formed human outpost on the planet. Your job? Do defend the said outposts and defeat the savages with the help of your massive, but pretty clumsy robot.

You will always control the BE-A Walker (Biped Enhanced Assault Walker), which looks like the walkers from Star Wars – the AT-AT and AT-ST – had a baby. Which is pretty cool, if you ask me! Who wouldn’t like to have the chance to pilot one of those beasts?

Well, apparently it’s not an easy job to get even the basic walking done, as you have to control the legs one at a time, raising and dropping them each, deciding the length of the step. All while trying to dodge projectiles launched by the natives or shake off your BE-A Walker’s head those annoying ones who try to smash your metal skull open with huge rocks.

I was surprised to see that in a world of games that are so dumb and easy that you get bored after just a few missions or you just cruise through everything at top speed. But not here! This game is extremely challenging, requiring you to perform like a beast and really pushing you to the limits!

This also shows that the old Civilization games were right: archers CAN defeat tanks or other armored vehicles!

But I digress… The game is so challenging and intense that I have to (shamefully) admit that I failed the tutorial mission. Really, I failed that introductory mission, running out of oxygen and having to start over because I was having such a tough time destroying the savages, controlling the walker and waiting for the friggin weapons to cool down so that I can actually shoot them again.

Definitely, I tried a different approach the second time and instead of waiting for the weapons to cool, I allowed my strong legs do the work and I simply walked over the poor savages, turning them into mush. Oh, the joy!

But it didn’t last long because three or four missions later, I failed again, this time destroyed by the sheer numbers of the savages. I tell you, this game is no joke and I absolutely love this about it. It seems I was getting rusty playing all these games that gave me a fake sense of power: they were actually to easy, not I too skilled.

The main problem I have with the game is that it is slow paced, and that’s not because I am unable to make my robot walk faster. No, the robot itself is slow, the missions are long and lack variety and even though you do get new elements introduced constantly, it’s still the same grind, back and forth, shoot and destroy, same planet, same savages (well, more or less, you’ll see!), same everything.

Visually, BE-A Walker is definitely eye candy. I love the way everything looks, from the Amazonian jungle-feel of the alien planet, to the tiny savages and the attention to details. Yes, I am that guy who appreciates the gunk sticking to your walker’s feet after you stomp through a horde of savages… and you have plenty of that for sure!

There is a story here as well – one that doesn’t really stand up to your classic Star Wars saga that you’ll probably think about over and over again – but one that works better than nothing. It’s something to give you a purpose and it does have an ending which you might or might not love. One thing is certain, though: don’t play BE-A Walker for the narrative!

Overall, the game is really good if you enjoy a challenge and you don’t mind having to replay a mission in order to get through the story. It is better than all recent walking simulators I have ever played – and that’s mostly because of the intense action part of the game.

Sure, the game won’t win prizes for originality, but it will definitely keep you entertained, challenged and glued to the screen, yelling “one more step!” while stomping savages and wreaking havoc all around you, with your walker fuming and just a couple of mouthfuls of oxygen left before you reach the base. And that’s all that matters to me!

BE-A Walker is available on iOS and Android, as well as Nintendo Switch and all other platforms.