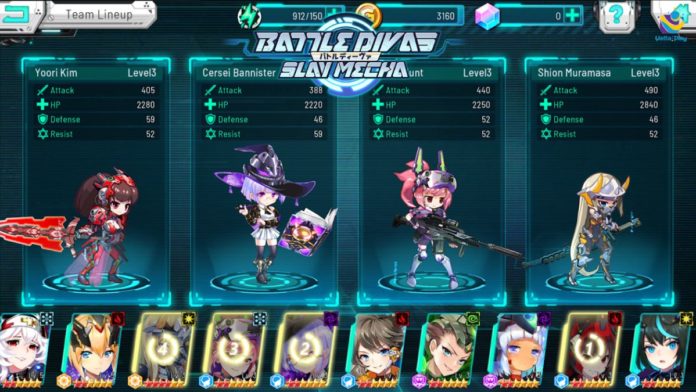 Even though not a traditional gacha game, Battle Divas needs a tier list created in order to help you set up the best team and decide which are the best characters in the game.

As you probably know already, it’s not actually the characters that matter here, but also their weapons which completely change the way you play the game.

Now, with the characters, you will unlock them all sooner rather than later, but weapons are not as easy to obtain.

In creating today’s tier list for Battle Divas: Slay Mecha we tried to take into account the ease of getting a character and chances of unlocking the best weapon for them.

I also decided to make this guide even more complete and not only share the best characters list, but also the best weapon for each character.

This way, you will have a much easier job setting up that perfect team and even if you haven’t unlocked a character that we recommend as a top one, you can still play a great game with what you have on hand.

So without further ado, let’s check out the ideal stuff: the best characters in the game, with the best weapons!

An amazing damage dealer that becomes better as rounds pass. Her critical hit chance keeps increasing and she can easily wipe out sets of enemies on the board.

You want to use one of her summoning weapons, and Origin of Sins is by far the best one. She summons tentacles around her, keeping her alive and proving to be a real pest for enemies. Great for spawning creatures all over the field.

One of the starting heroes, he becomes a real God with the Mount weapon. It summons a mirror image of the hero, which deals 75% of its attack. Perfect!

While she’s difficult to get, she definitely is a real joy to have around especially with this weapon equipped. Focused on destroying enemies systematically and without a problem, she is great to have in any type of team.

The best healer in the game by far. You need a solid healer in your team and she is it!

A massive weapon and damage dealer, but difficult to get. Better suited for longer battles, as she really unlocks the true strength of the weapon after the third turn and then as her health goes down.

A really good damage dealer which can easily replace any of the top tier heroes if you don’t have them. Her area of effect isn’t the best, but she can still prove to be very useful in battles.

One of the best weapons to take advantage of her sacrifice mechanic. However, it’s the randomness of the effect that doesn’t rank her higher on our list.

Good damage dealing hero that isn’t that good for long term battles, as he keeps losing the boost. He can alternatively be played as a support player with the Solemn Justice weapon equipped.

Good healer, but not the best in the game. She can take over if you don’t have Cersei, though.

A very difficult character to play, but which can prove to be really useful in the right circumstances. Her electric charges can really make a difference.

It is very unlikely that you will be able to have the top characters with their recommended weapon equipped. But do have in mind that some of the weapons that a character can equip have similar effects.

The more advanced ones are better, but if you don’t have them, you can definitely use lower star weapons.

But do test around and see what gives you the best results in battle, having in mind that on a character-by-character basis, the weapon with most stars is the best. Maybe exception to this rule are healers – you want them to be healing, not dealing damage!

Finally, do have in mind the area of effect of each weapon: these are also important and you generally want to use heroes that have a larger area of effect in order to offer you more freedom. We’ve discussed this in depth in our game guide – make sure to check it out if you haven’t done so already!

And this would be our Battle Divas tier list, completed by the best weapons for each character.

Would you rank the characters and weapons differently? Did you have better luck with other combos? Let us know by commenting below.