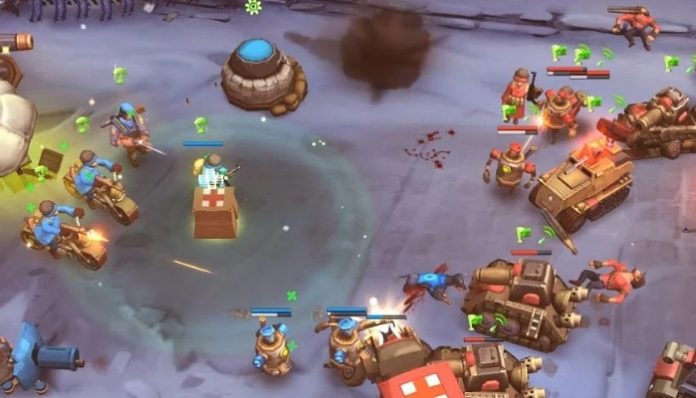 It’s time to bring explosions to the battlefield in Battle Boom, a tower defense RTS game! Be the ultimate commander and deploy a variety of powerful units, like Riflemen, Flamers, Snipers, and of course Tanks! With over 70 types of units, your army is yours as the combinations are endless! Our Battle Boom cheats and tips will give you some pointers on how to win on the battlefield.

In Battle Boom, battles are all about knowing which units to use and when to deploy them, and we’re here to teach you all about it with our Battle Boom cheats, tips and tricks strategy guide!

Battle Boom is all about timing your unit deployment so that your positioning is optimal. You’ve learned in the tutorial that you should have your ranged units in the back while your frontline heavy guys push forward. This allows your damage dealers to take out enemies while remaining out of harm’s way thanks to your frontline. This is pretty much the basis of Battle Boom’s combat, so make sure that you’re always positioning your units correctly!

The actual battles of Battle Boom are half active and half planning. Did you know that the most important part is probably the planning part? You should know what each unit in your deck is capable of.

Knowing is half the battle as they say, and being able to put units in their best positions on the fly is the key to victory. Some units have high attack power but low health, some have longer range than others, and some units deal bonus damage to specific types of units.

Beware of clumping up!

Another good reason to have a variety of units that have different ranges is to avoid clumping up. Having too many units all bunched up in the same spot is just asking for them to get blown up by a Missile or melted by a Firebomb. When you have melee and ranged units attacking from different spots, you can at least mitigate some of the damage by having some units be out of range.

Your mission list can be accessed by the button on the left side of the screen. Once you hit certain player levels, you’ll gain access to new missions. Completing a mission will reward you with precious gold, the currency you need to upgrade your units. You get some gold whenever you open chests, but completing missions is a good way to get it too.

Play through the Stages!

The single-player campaign can be accessed by tapping the “Stage” button on the bottom of the main menu. After you complete the tutorial, you’ll be locked out of Stage mode for a while. You need a certain amount of ranking points before you can play the next stage, so you’ll have to play the regular PvP mode for the time being.

However, once you do unlock a stage, you should play through it as soon as you can. Not only do stages provide you with gold upon completion, but each stage actually teaches you about a new unit and their strengths and weaknesses. Playing the stages is a great way you learn more about all the units in the game and you’re rewarded too!

Want to try out new units you’ve never seen before? Or do you want to try out a new deck configuration that you’re not too sure about? Play Casual Mode, which can be found under the Events. Casual Mode matches you up against another player like a normal battle, but no ranking points are at stake, so you can play carefree! This is great for trying out and testing new strategies.

That’s all for Battle Boom. If you’ve got any other tips or tricks to share, let us know in the comments below!