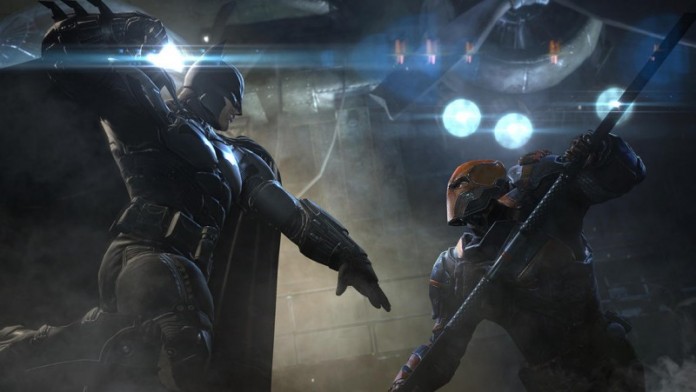 Much like the Dark Knight himself, the mobile companion game for Warner Bros. upcoming crime-fighting prequel Batman: Arkham Origins has swooped in like a silent shadow and taken perch in the iTunes app store.

The Batman: Arkham Origins mobile game, developed by NetherRealm Studios, is available now as a free download for both iPhone and iPad. Much like its predecessor, the popular mobile game Batman: Arkham City Lockdown, the Batman: Arkham Origins mobile game allows players to don the mantle of the Caped Crusader and do battle against a variety of new foes including Deathstroke, Bane, and Copperhead. Various WayneTech upgrades can be earned to help Batman take down these tough adversaries and WayneTech points can either be earned through gameplay or as in-app purchases.

Also up for grabs are a healthy number of different unlockable costumes for Batman including the JSA Liberty Files costume and the original Terry McGinnis Batman Beyond costume (in case you weren’t a fan of the bulkier Bruce Wayne version from Arkham City and Injustice: Gods Among Us). Much like the Injustice: Gods Among Us mobile game, the mobile version of Batman: Arkham Origins supports cross-platform unlocks which means playing the mobile game will allow players to unlock specific pieces of exclusive content in the console version when it releases next week.

The Batman: Arkham Origins mobile game is available now via the iTunes app store. If you’re not completely sold yet, check out the below trailer to see just how fearsome Batman can be even on a compact mobile screen.