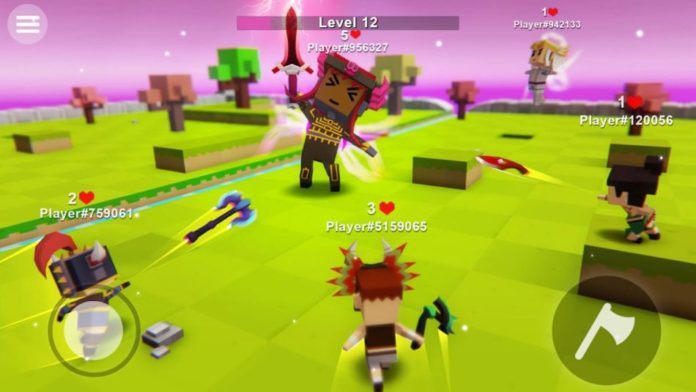 In today’s article we are going to cover all of the Axes.io tips and cheats that we have gathered so far and share them with you, so that you can become better at the game and learn everything that you need to know.

Since there are a ton of things to learn and even more to do in game, we are going to cover all of the most important ones that you really need to keep in mind, because if you want to become better, then you need to start with the basics.

So let’s not waste another second and focus our attention on all the Axes.io tips and tricks that we have gathered right here below and learn how to master the game!

Start by changing your name!

If you don’t want to be just another random Bob (no offense to the Bob’s out there) then you should definitely start by changing your name. This can be done by tapping on the text above your character, that weird and long Player#8344861939 (for example) and you can start inputting your preferred name.

That will be the first step towards becoming the best in the arena. That way you will personalize your character and start putting more effort into winning. But since this is just the first step, let’s move on!

Do your daily quests to get more Coins and rewards

Your daily quests can be found in the Daily Quests tab, which is on the left side of the main interface. There, you will have several quests which will refresh every day, so I suggest that you always try and complete all of them before they reset.

The quests will reward you with various amounts of Coins, which are used to unlock new characters and weapons. In my opinion you should try to complete all of them because they will not only give you Coins, but also points which you can save up to open chests!

Tap on Open More when opening the chests

Whenever you can claim a chest with the points gathered from the Daily Quests, you will receive Coins and also a new option which will allow you to open 1 more chest! To open 2 chests instead of one, all you have to do is select the Open More button which will appear and watch an advertisement to open one more chest.

This is super useful, as the chests contain a lot of Coins! That is also better to do, because it will take at most 30 seconds, and the rewards you get are definitely worth it.

There are 25 heroes in the game as of writing this article (more might be added in the future) and you can unlock them by leveling up more and spending some Gold! All that you really need to do early on is level up to level 2 and collect 2000 Gold (or 2500 Gold or more) to unlock one more character.

By unlocking 2 heroes you will get a 15% reward bonus, which is pretty useful when you battle. Definitely focus on saving up Gold to unlock a second character ASAP (because you already have 1 by default) and benefit from this 15% bonus.

My game tip here: I suggest that you unlock one hero which you like, from the ones with Coins, so that you can focus on the weapons afterwards. The heroes are good, but they only give passive bonuses when you unlock them (the 15% reward bonus I mentioned for owning 2, 20% reward bonus for owning 7 and so on). The real boost comes from the weapons, not heroes!

The weapons are what can make a game or destroy it for you. I suggest that you take a look at all the available weapons in the game right now, and think of how you want to play. If you want to do damage over time, if you want to be faster, if you want to have bigger range and so on.

Choose a weapon which you like, and then focus on gathering the resources needed for it. The weapons are the biggest deal here, so definitely have a better weapon will have a bigger impact on whether you survive or not.

My tip here: I suggest that you read the description of all the weapons in the game and try to choose one which you think would work well for you. Also, think about the bonuses which they give, and how that will affect your gameplay. A good weapon is everything that matters in Axes.io!

In the main interface of the game you will see on the upper right side of the screen a big icon with coins and the text Watch Ads underneath. This option will let you watch advertisements to collect 400 coins (per ad watched) and that is one quick way to save up Coins!

You will have a short cooldown between ads, but if you want to unlock more heroes fast, this is the way to do it! Simply take your time and spend a few minutes of your life watching ads, so that you can unlock some different characters or even unlock new weapons!

Get Crystals for free!

If you want to unlock some Legendary or Rare characters or weapons, then all you need to do is gather some Crystals! What better way to get more Crystals than to get them for free if you are a f2p player! Of course, it is easier if you are a premium player, but let’s focus on the free ways to get Crystals right now:

– Follow the game’s Instagram page for 10 free Crystals! This can be done in the main interface of the game, where you will see the Follow us! icon right underneath your Gold. Tap on that, and the game will open Instagram! You don’t really have to follow the game, just tap on the icon and be redirected to their IG page. After that, head back into the game and enjoy your free Crystals!

– Get more free Crystals by watching ads! Tap on the green + next to the Crystals in the upper right corner of the game, and the first option you will see is Free Crystals for watching an ad! Do this to claim 5 free Crystals and you will soon find yourself having a ton of them which you can use to buy your desired weapon or character.

You will have a 2 seconds cooldown between ads, so if you want to get a good hero / weapon, dedicate a few minutes to watching ads so you can save up enough Crystals. There will be 3 ads available for free, then you will have to wait a few hours for them to reset.

If you have just died, you can choose to watch a short advertisement to respawn. This is super useful if you want to make a big bonus, but if you died right at the beginning, then I don’t think it is worth watching an ad to respawn. Either way, it is your choice.

This option is only available once per round, so if you died, you can only watch an ad once to resurrect before you die again and will end that round.

Hide behind objects to dodge

If you want to avoid getting hit, then one safe way to do that is by using the environment to your advantage. If you see some big rocks, try to stay close to them so that if the enemies are throwing axes at you, you can move around the big rock and avoid getting hit.

This will help you a lot if there are many enemies nearby, because the projectiles will not go through the rocks. You can try moving back and forth behind the rock and shoot your axe at the enemy, then move back behind the rock.

Move all the time

If you are a sitting target, it will be much easier for the enemies to hit you. I suggest that you always try to move around because that way you will avoid getting hit often and avoid dying.

The axes thrown at you will not follow, as they can only have a straight line trajectory. So try to always be on the move to make it harder for the opponents to hit you!

Double your reward after each game

Whenever you finish a game, you will have a sum of Gold that will be rewarded to you! The added bonuses aside, you can double your rewards by watching ad advertisement! I suggest that if you want to get better, you try to do this because it is definitely worth it, especially if you gathered a lot of Coins during a round.

Now we know that early on it might be pretty difficult to survive a long time in the game, but trust me, practice makes perfect! The more you play, the more you will understand what each weapon is capable of and you will be able to survive more and more. So even if you die one shot as soon as you start a game, don’t give up – soon you will become the best!

Every single day that you log in tot he game you will be able to claim some free rewards! I suggest that you log in even if you don’t plan on playing that particular day because you can just log to claim these rewards! They will help you unlock more heroes and get a ton of coins!

Axes.io Cheats: Tips & Guide to Become a Pro at the Game