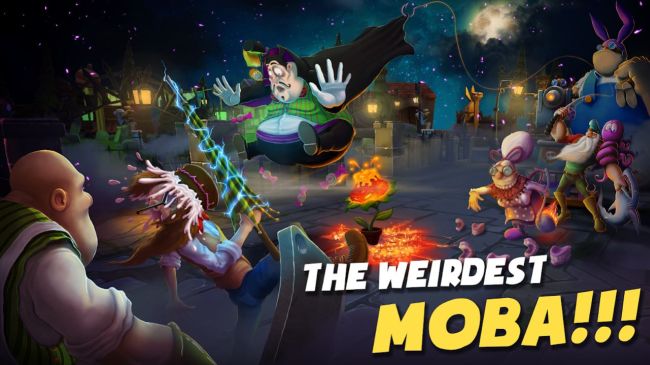 In today’s article we are going to cover all of the Awakening of Heroes tips and cheats that we have gathered so far and share them with you, so that you can learn how to become a better player and how to win more matches easily.

Since the MOBA genre is one of my favorites, I have to admit that I am always up for a challenge and to win more matches, as well as learning more about each champion. Only by playing a lot and learning all the different patterns and play styles of the players you will become really good, so if that is your goal, then you’re in the right place.

Therefore without further ado, let’s not waste another second and dive right into the Awakening of Heroes tips and tricks right here below and teach you everything you need to know in order to win more matches!

Minions, both in the lane and in the jungle should be your number 1 priority because they are the main source of Gold. The minions should always be your main focus, as their damage cannot be neglected in the early game. They will do almost as much damage as a champion would, so I advise that you that you don’t go head-first into the battle versus the first wave.

Another thing you should do is always try to stand behind your minion wave. Don’t go ahead, as that will make you the main target for the enemies. Now it all depends on what champion you are playing, because some of them are tankier than others.

Once you killed some minions, you can focus on picking up the Gold that they dropped. You will have to walk over them to pick up the Gold, so pay close attention to when you do this and don’t walk over into the tower range or enemy traps.

The Jungle Minions give great bonuses

You will also notice that between lanes there is an area with single minions (not in packs) which have a stable position. This is the jungle. In the jungle there are some monsters which have different abilities given to you once they have died: some of them will teleport you in a certain location, others will give a lot of Gold, and others buffs.

I suggest that you don’t try killing them early on especially if you are playing a squishy character (such as assassin, mage, marksman) because you will most likely end up dying right then and there. Instead, you can start killing them once you have leveled up a little bit and you learned some skills.

Shift your attention towards objectives

Objectives are going to be the way to winning the game. There are three main lanes which each has two towers (so there is a total of 6 lane towers). Then, there is one tower in the base and the enemy base. You will need to destroy the enemy base in order to win, but to get to the base you’ll have to go through all of the towers.

I suggest that you always look for the lanes where the enemy is missing and try to push the minions so that you can attack the towers. If you want you can even try and avoid fighting altogether, but that might not always work out.

I would advise you to kill the enemy minions as fast as you can, so that you will have a few of your own minions left alive to tank the enemy tower. Then, wait for your minions to start moving first and you move after them. That way you will avoid getting attacked by enemy tower, which deals a lot of damage.

Another thing worth mentioning is that for PvE objectives you will see a circle around them. That circle can be white or green when you are safe, orange when you have 1 minion left alive who is about to die (as a warning), and red if the enemy tower is targeting you. Si try to pay attention to these colors and if you see orange, be on the lookout for that low HP minion and get out of tower range ASAP.

Do your Daily Quests

That might be a little bit of a grind sometimes, as it could depend on the team you get, but either way I suggest that you do your best and always try to complete as many of them every single day.

When they reset, so will your progress for the Daily Quests Chest, so that’s why it is ideal that you try and complete all of them in time. This Daily Quests Chest contains some super useful items for free, so if you are a f2p player it is going to be especially useful!

If you want to add an extra 120 free Gold into your pocket, I suggest that you check out the option in the game’s main interface, next to the Battle button. There will be a small white button with a video reel. Tap on it, and you’ll open a new window.

In the new window you will see the Tutorial on the left, then 4 other options on the right. These are all videos that you can play on YouTube, and they all teach you various tutorials. All that you need to do in order to claim the coins is tap on a video once.

This will open the video in YouTube app, but all you need to do now is head back. The Gold will be given you whether or not you’ve finished watching the video. Repeat this for all 4 tutorials, and you’ve got yourself 120 Gold for free in just a few seconds!

Every single day you’ll be able to claim a Daily Deck, which contains some useful items. This can be opened only once a day, and you will have to choose 3 of the 6 cards shown to you. Pick wisely, as you might be lucky enough to get some good Rare items for free!

Get useful items from the Shop

In the Shop there will be some useful items which you can purchase for using Gold. I suggest that you purchase the ones which you need the most, and not all of them. If you can afford it, it is best to choose the Rare or Epic items because they are a lot better than the Common ones.

The Rare items cost a lot less than the Epic ones, but if you have a lot of Gold and no champions that you want to buy with it, then this is one of the best investments that you can make in the game.

Check out the wares in the Shop every single day because they refresh once a day, bringing new stuff about!

Save up your Gems for Mayor packs

If you are a f2p player then you will want to get some amazing Epic items sooner or later. Well, you can do that by saving up all the Gems that you obtain and spend them in the Shop on the Mayor packs. There are three Mayor packs, each containing guaranteed 2+ Epic items.

I suggest that you save 750 Gems and purchase the Mayor’s Glorious Deck, because from there you will obtain 10x Epic items. It is a lot better than spending 250 Gems on the Mayor’s Worthy Deck because that only gives 2x Epic items!

There are three main Lobby Powers. They are located in the right side of the game’s main interface, and you can choose which one you want to use:

– Shield (gives you a Shield)

The Heal is great for any character, no matter the situation. Shield too can be used in any situation, no matter what your champion class is, but the Reflect Damage is ideal on tanks which have a lot of defensive skills.

Try them all out when you play with different champions belonging to different classes, because you will see quite a big difference, I am sure!

Gear up and get stronger

Make sure that you always upgrade your equipment because it is going to make a big difference once the numbers start adding up. Unlike in many other MOBAs out there, here you spend the in-game gold for various skills, while you basically obtain some stable standard gear for your characters.

I suggest that you always look to equip a new piece of gear when you get it, and upgrade the ones which you find the most useful. The upgrades cost Gold, so don’t waste it on equipment which you are not likely to use.

These would be all of our Awakening of Heroes tips and tricks that we have for you right now! Do you know some more useful game tips and strategies to win games? Feel free to share them with us by leaving them down in the comments section below!