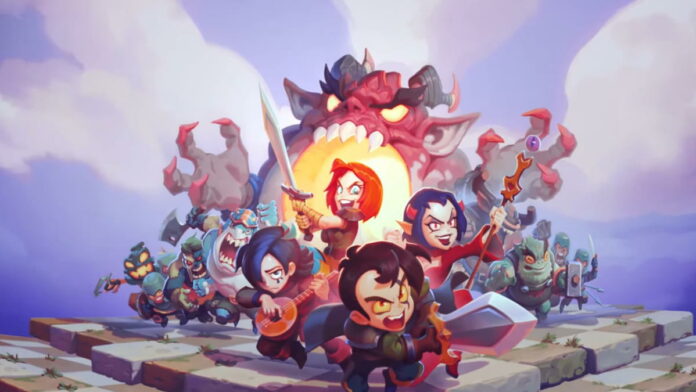 Panoramik Games, the team behind the hit auto chess game Mighty Party, is back again with another auto chess game: Auto Brawl Chess! Players will take command of a team of elite fantasy warriors and face off against other players from around the world. Each unit has their own faction and behavior, so you will need to strategize to get the upper hand against your opponents!

Auto Brawl Chess seems at first to be a simple game, but there is lot going on if you take a look at the individual heroes. If you are beginner to the game, we will show you some general strategies that are helpful early on.

To start a match out it is usually a good idea to focus on common heroes, who have the highest chance of appearing during the first half of the match. Focus on merging copies of your common heroes to get yourself a good starting team.

Merging two copies of the same hero together will increase the rank, as indicated by the amount of stars on the hero. This increases their stats and powers up their skills, making them much more powerful.

In general a team full of 3-star common heroes is stronger than a team of 1-star rare heroes, so you will want to focus on the more common heroes first. Your rarer heroes start to pick up in the long run, so they will be much stronger during the late stages of a match.

The biggest trap that you will want to avoid is investing too much in rare heroes during the early game. Sometimes when you are lucky a rare hero will show up in the your hero pool, but resist the urge to spend the extra coins on them.

One of two team size expansions is good enough for the early game. Most of your efforts should go towards powering up a team of common heroes.

Late Game Strategies and Going for the Win

It is sometimes hard to tell what “part” of the match you are in, but in general if some players have been knocked out and only a couple remain, you can be considered to be in the late portion of the match.

During this time, your plays will be even more important as it can decide who gets the winning momentum. At this point in the game you should have a few rare heroes on your active team, and ideally they should be powered up a few times.

Do not worry if they are not maxed out, as you still have time to do that. If none of your rare heroes are powered up, you need to do that as soon as possible.

Before you can do any of this though, you should ensure that you have the team space to increase your team. There is power in numbers, and that rings very true in Auto Brawl Chess. More team slots during the late game is very crucial because even just a single hero can make all the difference.

The late game also increases the spawn rate of rare heroes from your deck, so you will start seeing less common and more rare heroes. Remember that you can always sell your old heroes if you need a few extra coins.

The late game is all about who gets the momentum first when it is down to a few players and every move counts. Getting the win streak coin bonus helps immensely, as you can power up your existing heroes or increase your team size.

Keep beating your opponent to continue the win streak coin bonus and you will be able to power up your team even faster. This is why the winning momentum is very important, as it allows the player to expand their team size and purchase more heroes.

Auto Brawl Chess has a rather confusing way of unlocking new heroes, and the game never properly explains it to you, so we will do our best to show you how it works.

First off, the heroes listed in your hero category are heroes that you actually own. However, this does not mean these heroes will be the only ones you can use during a match. In fact, you have probably noticed unknown heroes showing up in your spawn list at some point.

That is because any hero in the game can spawn into your hero pool, but the heroes you actually own have a much higher chance of spawning.

There are two ways to properly unlock and own a hero, and the first and main method is to do summoning from the shop. You can use special scrolls obtained from winning matches to summon heroes, or you can pay gems, the premium currency of the game.

The other method – and the one that the game never bothers to mention – is that you can actually unlock heroes during matches. If you power up a specific hero to a high enough rank (which differs between heroes), that hero will become permanently unlocked.

For example, Minerva the Beast Mage will become yours if you power her up all the way to max rank during a match. Check a hero’s info page if you are after a specific hero to know what you have to rank them up to.

This is obviously hard to pull off since you have to be very lucky, but if you see the opportunity make sure to take it!

The tutorial briefly goes over the faction and classes bonuses. Basically, whenever you have multiple heroes deployed that belong to the same faction or class, a synergy bonus will activate, granting them special buffs.

These synergy bonuses are very powerful, so do not underestimate them. Try to build your team around at least one factor, whether that is class or faction, and you will have a powerful boon on your side.

To give you an example, the synergy bonus for the Empire faction is that whenever your enemies drop below a certain health threshold, they will immediately be killed on the spot.

It is also worth noting that these synergy bonuses often get better depending on how many heroes you stack. The Empire’s bonus for example increases the health threshold if you have a lot of Empire heroes, making enemies instantly die even faster.

With eleven factions and ten classes to choose from, you may be wondering which synergy bonuses are worth using. Generally speaking they are all worth using, but here are some of our favorites.

The aforementioned Empire “execute” synergy bonus is very helpful on tanky enemies. This bonus probably needs the most investment, but the payoff is rather insane: when you have eight Empire heroes on the board, the execute health threshold becomes 80%!

The Beast synergy bonus gives all heroes, regardless of their position on the board, a percentage attack damage boost. Simple and straightforward, this bonus can easily wreck unprepared teams apart from the raw damage.

Dwarves’ synergy bonus makes them completely invincible for a second or two. A team of Dwarves can reliably take down an enemy team that depends heavily on burst damage, like Mages.

The Undead synergy bonus causes all enemies to slowly lose all of their health over time. A mass team of Undead can take out even the tankiest of teams if given enough time.

Now, onto classes. Slayers get a particularly nasty synergy bonus: there is a chance that their normal attacks may do triple damage, and it activates more often if you have more Slayers on the field.

Soaring heroes cut the attack speed of all enemies, up to half their normal speed. This synergy is great for teams that rely on normal attacks, like Shooter and Warrior focused teams.

Shamans’ synergy boosts the skill power of all allies. This is great if your team has a lot of Mages or other skill-focused classes.

These are just a few of our favorite synergies. They are all useful, so experiment and see which ones you like the most. It is usually a good idea to build around one faction or one class, but keep in mind that some synergy bonuses only need about two heroes to cap out.

You will need a lot of gems and scrolls to increase your armory, so make sure that you are completing the daily and weekly quests. You do not get anything for completing the individual chests, but you do get exp points that can be used to open prize chests.

These chests contain a random assortment of goodies, including hero shards, gems, and more. Daily quests reset every day, so make sure to complete them before you stop playing for the day.

Epic quest are persistent quests, so you do not need to worry about them going away. Take your time and complete them at your leisure.

Do not forget to claim your online bonus as well, which can be done from the main menu. You can claim the online bonus as long as you have had the game open for the listed amount of time.

That’s all for Auto Brawl Chess. If you have any other tips or tricks to share, let us know in the comments below!