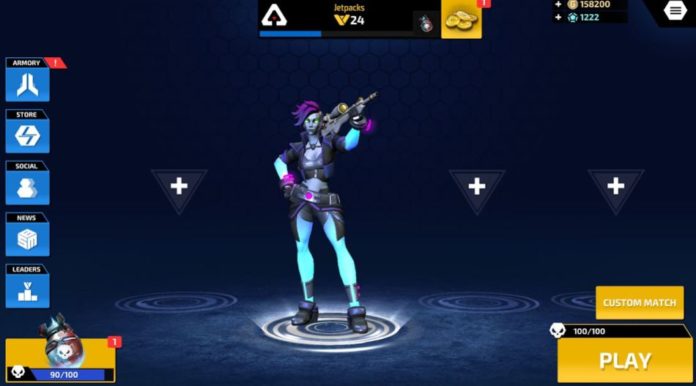 In today’s article we are going to cover all of the Armajet tips and cheats and help you win all of the battles that you are headed on into, with all of the friends (or strangers) that you queue up with!

Since this is a super fun game, you will most likely learn everything there is to know on your own in due time, but in case you want to learn some tips to help you from the very earliest stages of the game up until the more advanced ones, then we are here to deliver just that!

So without further ado, here are all of our Armajet tips and tricks with everything that you need to know about the game!

You should always try to practice the battles and also using all of the weapons in game, because this will help you improve quicker and understand what the range of the attacks is, what their attack pattern is and also the amount of damage they do.

Since you won’t understand a whole lot from the very beginning you should go ahead and dive right into the battle because that will help you better understand everything pretty much.

I suggest that you start shooting before you encounter any enemies, to see the range and the pattern your weapon of choice will have, because that will help you better position yourself when you’re going against the actual enemies and you will have a much easier time dealing with them.

– You can move by using the on-screen joystick in the left side of the screen .

– When you press the Up button on the on screen joystick you can fly, but only for a limited period of time.

– You will not fire automatically, and therefore you will have to tap on the fire buttons on the right side of the screen to target the enemies and fire at them.

You can recharge your jetpack by simply not pressing on the up side of the joystick to move upwards. The best way would be to sit on the ground for a couple of seconds and that will automatically recharge your jet.

Always keep in mind to check out the fuel levels because if you are caught mid-air without any fuel then you will start going down fast and that’s not super useful especially if you want to get to the higher up platforms.

My tip here: To make better use of your jetpack simply try advancing by using the pulsating boost platforms to boost you up the air without going upwards to use your fuel. Also, try advancing one platform at a time because that way you can recharge your jet.

You can unlock more weapons by opening various packs which will give you random blueprints for the weapons in game. In order to unlock certain weapons you will have to collect a certain amount of blueprints and depending on the quality of that weapon you will need more – or less blueprints.

You can also unlock certain weapons for free from the Valor Road (earn more Valor to unlock more weapons, fighters and so on) which is given to you by winning games. The best weapons however can be found in the packs, so let’s take a look at them:

– Micro Pack: those are the lowest level of pack in the game, and they will contain one item inside only. They cost 1000 Gold or can be received from earning battle points by battling. You will also unlock a couple of them from the Valor Road but those are a one-time claim only.

– Buster Pack: these are slightly better packs because they will give you 1 Epic Item guaranteed, 2 Rare Items guaranteed from the total of 4 items. These cost 500 Paragon per one pack, so you can afford one as soon as you start playing the game.

– Megaton Pack: these are the best packs, as they will give you 9 items in total out of which 1 will be Legendary quality guaranteed, 2 will be Epic quality and 3 will be Rare quality. The price of this is 1000 Paragon, so you will have to save up some Paragon to open it.

In my opinion the best thing you could do would be to either buy the Buster Pack right away as you start the game and hope for the best result or to save up enough Paragon to buy the Megaton Pack which will definitely pay off. Either one you do, it will still give you some decent stuff so by all means you should do it.

Every single day you will be able to claim some 200 free Coins by heading on to the Store. There you can see under the Buy It Now menu that there will be an icon which will show you that you can claim 200 Coins for free! Make sure you do this every day because you can use them to purchase Micro Packs!

Watch an ad to get free Paragon

You can receive free Paragon by heading on to the Store button and if you wait a couple of seconds you will see that the daily free Coins icon will flip around and reveal an icon which will let you claim free Paragon.

This option will require you to watch an advertisement which in return will give you 10 Paragon for free! If you don’t have anything better to do or if you want to save up for the big Megaton Pack, this is definitely something that will help especially if you are a f2p player.

Play with friends and take down foes

– Search Players: this option lets you search players by name – so for example if you want to add more players simply type their name in here! If you want to add me to your team, you can add my name too – it’s “gulb” (yes, I know it’s a bit odd). Leave your names down in the comments section below to be added by other players!

– Suggested tab: here you can see the players that you’ve previously teamed up with when you queued for games. If you noticed someone in particular that you liked, then send them a friend request and queue up with them again!

– Join a clan too: In the Social -> Clan tab you can see all of the clans currently created in the game. If you are playing with some pre-made friends already you can all work on creating a clan together and teaming up with your clan mates.

Specialize in a type of weapon but learn them all

At the very beginning you will be able to try out different weapons and play with them quite a bit. You might have noticed that there are some weapons which deal AoE damage, others which will snipe you and others which will let you shoot multiple times.

Well, the best thing you should do is choose your best one and specialize with that – play multiple games while using it and try to unlock more of that weapon type because that will make it super easy for you to carry any fight.

However, specializing in a single weapon is not enough as you should also know how to use all of them. This will be super useful because then you can try and counter enemy’s weapons.

Learn all the game modes

There are two main game modes in Armajet – Death Match and Fuel Frenzy. Try to play them both and learn how they work because they will make things much easier if you want to win a lot of games.

Deathmatch: this game works by having the most kills at the end of the timer, or by acquiring 30 kills first. So it’s pretty much a full on battle!

Fuel Frenzy: this game mode will work by having the teams acquire fuel from the enemies. Each player can store up fuel collected from the enemies, and if the enemies take down a player who has 4 fuel for example, they can pick it up for themselves!

The Fuel Frenzy game can be turned around very easy if the teams know the objective of the game, so it’s a very back and forth mode which can mean it’s pretty much anyone’s game!

– When you pick a weapon which has more damage, or is a super burst weapon, then you will lose a little of your mobility. This will mean that the counter to that is the light weapons.

– There are certain weapons which can pretty much counter every weapon in the game. Those are the Blacktusk, Tremor and Longclaw. If you master those you will do well in pretty much all battles.

– Learn all the game modes and always vote for the one which you are the best at in the 3 seconds after the matchmaking!

– Always be on the move – it’s much harder for the enemies to target you if you are constantly moving or flying around, and that will also help you dodge the enemy incoming attacks.

– Use some power-ups such as the invisibility one to make you much deadlier and make the enemies unable to target you! If you are a Sniper this will work super good for you!

– Pick up the HP and other power ups from the ground because they will help you sustain yourself for longer or give you various boosts, such as shields, invisibility, double damage and so on.

These would be all of our Armajet tips and tricks that we have for you right now! Do you know some more useful game tips and strategies? Feel free to share them down in the comments below and don’t forget to leave your in game name’s there to add more friends!