Home Guides Are Tornadoes in Fortnite? Everything You Need to Know 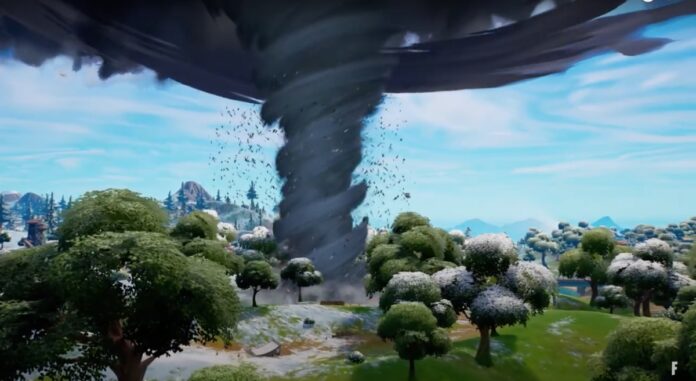 Tornadoes are coming to Fortnite! Leaks have shown that some disruptive weather will be occurring very soon, causing damage and general mayhem. This latest chapter has proven to be one of the most exciting, with Spiderman, IO Guards, and potential dinosaurs, and this new update will be no different!

Tornadoes are Coming to Fortnite

We first got the hint that tornadoes were coming to Fortnite when the Chapter 3 artwork was released. Check out the massive twister in the top left corner, devastating Chonker’s Speedway! Maybe this gives us a hint at its first spawn location?

According to the information found and leaked by Mang0e on Twitter, the Fortnite tornadoes will take 25 seconds to form, and may have a maximum duration of 8 minutes. Once they have appeared, they will wreak havoc on the map, picking up objects and throwing them around, including players. Some leaked gameplay suggests players could use them to fly upwards and move to another area. It is also suggested that any players hiding in bushes will be picked up by the tornado and lifted off elsewhere—so beware!

One tornado is currently planned, and more will soon follow, as is the usual Fortnite way. They could vary in intensity and duration, so we will have to wait and see what happens when they do arrive. Leaks suggest that the tornadoes will spawn in one location and not be able to move to another, but a separate tornado could spawn in a separate location. Some players have already begun to see grey clouds spawning, but not yet a fully formed tornado, so they could appear any day now!

Two potential spawn locations for the tornadoes include Sleepy Sounds (as seen in leaked test game video) and Chonker’s Speedway (as seen in the Chapter 3 artwork). These are yet to be confirmed.

Keep your eyes on the weather as you play—these tornadoes could strike at any moment! Good luck!