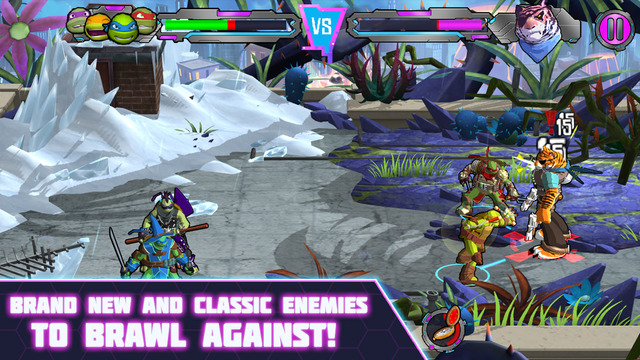 If you have been playing video games for a very long time, you will surely remember the excellent Teenage Mutant Ninja Turtles arcade games developed by Konami. If you are a fan of these classics, you will be happy to know that a new TMNT game has been released on the App Store a few hours ago, a game that tries to recapture the spirit of the classic arcade games.

In TMNT – Portal Power players will control the four Ninja Turtles as they travel through several different stages, defeat Foot Clan soldiers and eventually confront bad guys Shredder and Kraand to try and put and end to another of their evil plans.

TMNT – Portal Power allows players to control all four turtles at once by using the dedicated buttons found in the lower part of the screen. By pressing the right weapon, players will make the selected turtle attack the enemies. While the actual experience isn’t all that deep, there’s still plenty of fun to be had, thanks to the costumes that can be collected, which allow players to power up the turtles, unlock new special moves and even stages.

TMNT – Portal Power is now available for the price of $5.99 on the App Store in all regions.