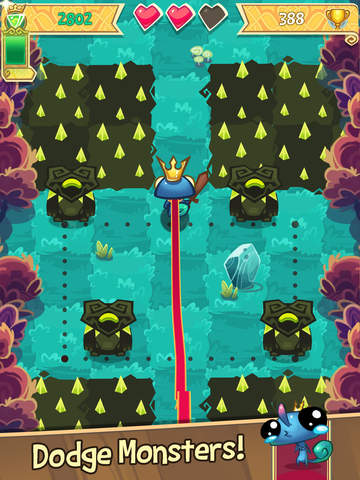 Noodlecake, the team behind many successful iOS game, has come back today with yet another game that promises to be quite addicting. Its endless features will also make sure that those getting hooked to it, will stay so for quite some time.

The new game published by Noodlecake is called Road To The King, and it’s been developed by NoHuman. In the game, players will take control of Edward, a rather strange creature that wants to become king. The path to become the ruler of the land is long and hard, and players will have to work hard to help Edward achieve his dreams.

The Road To The King gameplay experience is quite simple. Players will be moving Edward by sliding their fingers, collecting power ups, defeat enemies and avoiding dangers as the stage proceeds automatically.

Road To The King is now available for download for free on the App Store. You can learn more about the new game by checking out the trailer right below.