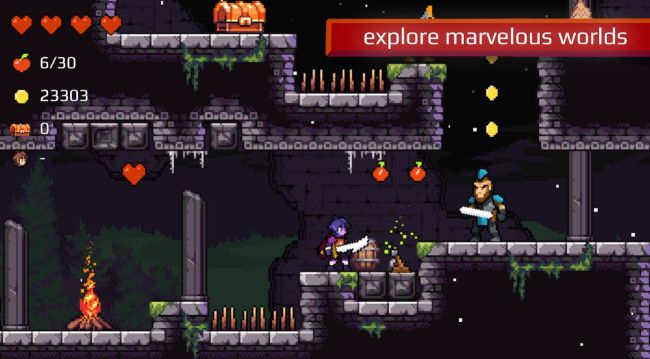 In today’s article we are going to cover all of the Apple Knight tips and cheats to help you pass more levels and better understand this pretty platformer game.

I have to admit that I’ve been drawn to this game at first because of the pixel graphics, but then, once I started playing, I felt like the entire game was pretty good! That made me like the game quite a lot because it instantly made me think that there are hidden locations, chests and rewards, and rightfully so!

This is a really fun game, and if you love adventuring and discovering new areas (secret areas in the game) and pixel graphics, then you’ll probably love it just as much as I did!

But enough with the praising for now – you came here to learn all of the Apple Knights tips and tricks, so let’s not waste another second and dive right into them!

Open the chests with ads

This is a feature which will allow you to get a ton of rewards. All that you need to do is look around for the chests which have a small Play button on them. When you walk close to it, you will then be able to select either the Attack button or the Apple button (both of them will attack) to interact with it.

As soon as you do that, an advertisement will play and once it’s finished you can receive all the rewards. I suggest that you always try to find all of the chests with ads and go open them, because the rewards you receive from such chests are way better than the rewards from other chests. So try to do this always!

Set up the controls

There are a few types of controls in this game, and I definitely suggest that you try them all out, because that will help you pick the easiest one for you. Since there are several types, you will be able to choose one as soon as you start the game, but then you can change it at any time.

To change the controls and try all of them out, simply tap on the Settings menu while you are in the game’s main interface. After that, you can try out the various types of control there are:

– Square (the controls will have square buttons)

– Radial (the controls will have round buttons, but they are pretty much the same as the Square ones – not a big difference in gameplay)

– Radial Compact (just like the Radial, but smaller and closer together)

– Console (round buttons, but the actions on the right side are placed like the buttons on a console – the X, Y, A and B)

Overall there is no such option to play with a joystick, so I suggest that you try them all out and see which one fits your grip and device the best.

You can quickly give them all a try while you start a level by tapping on the Pause in the upper right corner of the screen. There, you will see that you can choose your desired controls.

Go through all of them and you will notice that there is a grey area around the buttons. That area will increase or decrease depending if you choose normal or compact, and it will activate said option by tapping on that area – not even necessarily only on the button. So try them all out and pick the best one for you.

Look for the hidden locations

In the levels you will be able to find various secrets. You can discover secret chests inside walls, across hidden and harder to reach platforms and so on. I suggest that you keep a skeptical eye on all of the walls and try bumping into all of them, because you never know if there is a hidden passage behind it!

Try to do this because it’s similar to how it was in Jazz Jackrabbit (an old platformer game which I used to love) and you can find there chests and other useful loot. Do this and always try to loot all of the items which you can!

Keep an eye on the tasks

When you start playing a stage you will notice in the left side of the screen that you will have a list of all the items which you can discover. There will be shown all the Apples and chests that you can find in that level, so try to go for all of them to fully clear a stage.

The Secret Chests can be found in every level, and they will most likely be hidden within walls and other such locations. There will be 2 such chests in every level, so try to always collect all of them.

During the levels you will discover all kinds of stuff, from levers which will unlock new stuff to barrels, chests and so on. Even if the barrels will not have any indication that you can attack them, you can still do it. Usually they contain Coins, so it’s an extra way to obtain a couple more Coins.

Look for the crates

It’s a good thing to always practice the controls whenever you are in the levels, because they will let you have a better control over the games. I suggest that you play and re-play the first levels a couple of times so that you can get used to how they work.

The more you practice and play the early levels, the faster you will get used to the controls and how to move your hero. Here are a couple of things which I have to share with you:

– You will hang on to the side of the walls when you touch them, so you can jump again from there. Always press the direction buttons to stick to the walls when jumping.

– You can double jump, and if you want to go further stick to the side of a wall and jump (or double jump) again from there.

– You can attack the chests to open them, either with melee attacks or ranged ones. The same works for the enemies.

– Make sure that you are not landing on the spikes or on the enemies because they will reduce your health.

Get more Coins for free

There are a few other ways to obtain more Coins, other than collecting them from the stages. If you want to purchase some of the Skins, Weapons or Abilities which you have unlocked, then let me tell you how you can get more Coins for free:

Get more Coins by watching ads

If you want to obtain 200 Coins for free, you can choose to watch an advertisement and it will instantly grant you 200. To do that you can tap on the Player menu and there you will see in the upper right corner an option which will let you play an advertisement. I suggest that you do this once you unlock the first weapon because it will let you get it easier (if you haven’t yet collected all Coins).

Get more Coins by Rating the game

This option can be done once per game, and you can receive 200 Coins when doing so. I suggest that you do it as soon as you start the game, because the Coins will be rewarded to you instantly. Just tap on the option and it will open a new page where you can rate the game – you don’t really have to do it, just head back into the game and the Coins will be given to you.

The levers will give you either easier access to the secret areas, or they will help by killing tougher to reach enemies. When you are next to a lever, select the melee attack button and it will activate it. Pay attention to what it does (activates spikes to kill enemy or activates a hidden platform) and if you need it to help you reach some hidden stuff, use it!

You will be able to unlock new weapons by breaking down weapon crates which you will find all throughout the stages. The same works for the Abilities, which can be found in the various areas in the game.

The Skins can be unlocked by using Coins, so make sure that you save up either 3000 Coins or 9500 Coins to buy the Cursed Armor or Night Assassin skin. These will give you some extra stats and that’s going to be really useful.

Do this early on in the game, because all you need to unlock them is Coins – you won’t have to unlock them from the chests. Read the perks it gives you and make sure that you equip the skin which you like the most.

The weapons will be found in the various crates in the game. They will need to be unlocked first, and then you can buy them using a few Coins. All of the weapons have different stats, but the better the weapon you unlock, the more damage it will do and have better overall stats.

Just like the weapons, abilities can be unlocked too by discovering them beforehand. Do this to activate all of the abilities, and then equip the ability which you like the most. (try them out beforehand)

These would be all of our Apple Knight tips and tricks that we have for you right now! Do you know some more useful game tips and strategies to help you pass the levels? Feel free to share them with us and the other players down in the comments section below!