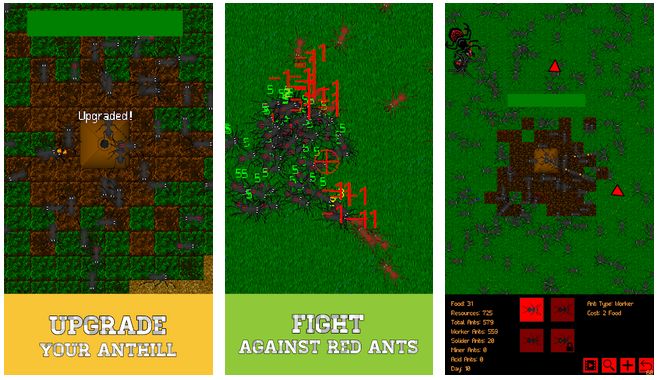 Ant Evolution – ant terrarium and life simulator is an amazing Android game created by Flighter1990 Studio, challenging you to build a thriving ant colony and rule the universe. Or at least the yard, defeating other colonies and threats.

Today, we’re here to help you play the game better or at least make sure that you start it on the right foot: we have a complete Ant Evolution guide for you here: tips, cheats and tricks to help you play a better game.

Ant Evolution looks and feels a lot like an old classic (one that I have played and loved back in the days): SimAnt. So if that name rings a bell and you haven’t installed this game yet, make sure you do. And afterwards, check out our game tips below!

You won’t realize how important are Ant Soldiers (and every other type of ant that deals damage) until your finger starts hurting from the tapping.

Really, you should always have a ton of Ant Soldiers available, and then pair them up with as many more advanced ants in order to fend off the attackers. It will always be a huge challenge.

The good thing is that these attacking bugs will only target your anthill and not worker ants or other types of ants. This means that they are safe for the duration of the attack, which is always good to know.

The problem is that you don’t have a direct control over your ants (soldiers included), and since attackers come from various directions – usually from all sides – you need a ton of ants in the first place to cover all these directions.

Don’t forget that you can summon more Ant Soldiers during the battles – do so, especially if the opponents are starting to get dangerously close to your anthill. You don’t want it destroyed and all your progress ruined!

While these shouldn’t be your main focus, challenges are definitely extremely useful when it comes to progressing through the game and getting better chances of surviving the increasingly difficult bugs that attack your colony.

Early on, the challenges kind of guide you through what you have to do and especially how many ants and of which kind you should have.

However, as I said, focus more on building a sustainable colony that is VERY WELL defended and don’t make it your main goal to complete the challenges.

Consider them bonuses that you have to aim for every now and then, especially after getting through with the first several ones.

What upgrades to focus on?

Fortunately, you can buy all sorts of upgrades in order to increase your chances of building the best colony ever. You will actually have to do it, otherwise you’re doomed.

The first upgrade I recommend you to get – even though it’s not a cheap one – is the Tap Attack. This way, you will have an option to help fend off the incoming attacks.

Next, get the Anthill upgrade because chances of enemies getting to your anthill are high and it’s better to be safe than sorry.

Afterwards, unlock the Acid Ants because you need their increased damage dealing and ranged attacks. They are very useful and worth every resource you spend on them!

Once these three important upgrades are purchased, you can either go for increased attack power, increase the lifespan of your ants or focus on other upgrades, based on whatever you feel like spending your resources on. But the first three are vital in my opinion.

Simply having the ability to deal damage doesn’t help much if you don’t put it to good use. So make sure to take advantage of your newfound powers and tap those bugs like there’s no tomorrow, reducing the damage they deal to your colony and making it easier for you to grow and progress.

Focus on the biggest threat first, even though they are difficult to beat. The meanest of them all are the yellow ants: fast and dealing a ton of damage, these should be taken out first, as they can really destroy your guards fast.

Afterwards, go for the threats that are the farthest away from your anthill: the ones that are closed are easier to be dealt with thanks to your anthill’s defenses and new Soldier ants that you can summon.

I also recommend leaving the beetles last, because they have a ton of health and take a lot of time to be destroyed (but as a pro, they only deal little damage).

Now matter how much you help and how many ants you have, you will always have huge losses after each battle. Make sure to replenish your forces as soon as possible, otherwise you risk being caught off guard.

You can also start creating more ants during the battle: this is especially useful if you have bugs getting really close to your anthill: the newly summoned ants will attack the closest enemy, making it easier for you to keep the Anthill safe.

But when replenishing forces, make sure to keep an eye on your worker ants and miners as well: you need those numbers maxed out at all times as well, in order to have a steady influx of resources incoming.

Find the right balance between Worker and Miner ants

I would say that Worker Ants are the most important in the game, after Soldier Ants – but the latter can’t exist without the former. So make sure that you always have a huge number of those, as they provide you with the food needed to keep the colony running.

Also, make sure that you constantly increase the number of Miner Ants as well, because the resources that they deliver are needed for new upgrades and boosts.

I usually have 50% less Miner Ants than Workers (so for 500 Worker ants, I try to keep the Miner ants at around 250). But after you get 300 workers, it’s about the right amount to keep on at all times.

Attack the other colony with more resources than recommended

As your colony grows in Ant Evolution, you will be ready to prove your might against the other colonies out there. But it won’t be easy, as you will have to mix sheer numbers with bit of strategy in order to win.

The way that attacks work is this: you have a set amount of resources that you go to attack with, and you will use them to buy ants in battle (which are more expensive than in the regular game).

You guide your ants toward the enemy anthill with a system of waypoints. You have 500 seconds to win and you should always make sure that you check the paths available well in advance, in order to choose the easiest and fastest route to the enemy.

Don’t even think about winning with just the base resources required: bring at least 1,000 more is my recommendation. The problem is that if you go there and lose, you will also lose the resources, so make sure that you make them count whenever you decide to launch an attack!

This is all for today! If you have additional tips and strategies that work well in Ant Evolution, don’t hesitate to share them with all of us by commenting in the comments section below.