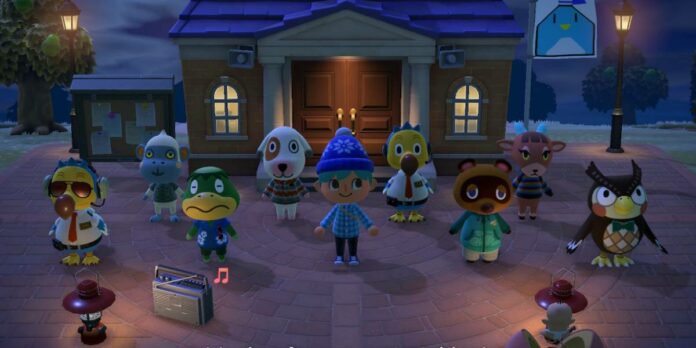 You can now cook if you have any kind of kitchen furniture. If you’re unsure of what counts, simply try interacting with any kitchen item. If you get the prompt to cook, then you’re good to go.

Cooking requires you to have ingredients at the DIY recipes. You can buy a starting set of recipes from Nook’s Cranny, and you can get an additional set from redeeming Nook Miles at the Resident Service’s ABD.

Many of the recipes require produce that you can only get from Leif, so you’ll have to wait until he comes to visit your island to get started. Alternatively, you can get him to move into Harv’s Co-Op, which we’ll explain more below.

Cooking is mainly for fun — you can eat your creations, of course, but all they do is fill you up more than eating plain fruit does. Unless you’re replanting a ton of trees or breaking all of your rocks, there’s little reason to cook. Though, the completed dishes do make for some nice decor if you’re looking to spruce up your kitchen or dining room.

Related | How to Put On the Work Uniform in Animal Crossing: New Horizons – Happy…

You can set Ordinances at Resident Services. Talk to Isabelle and she’ll briefly explain to you that Ordinances are “passive effects” that change the way your island operates. Choose “Review Island Features,” then “Discuss Ordinances”. It costs 20,000 Bells to enact an Ordinance, and they take effect the following day and last until you deactivate them yourself. There are four Ordinances to try out: Beautiful Island, Early Bird, Night Owl, and Bell Boom.

The Beautiful Island Ordinance will focus on keeping your island nice and tidy. While this Ordinance is active, villagers are more likely to water your flowers around the island. Weeds will not grow as fast when you’re away from the game for a long time, and cockroaches won’t show up altogether. Hybrid flowers also have a higher chance to spawn. Perhaps the biggest thing of this Ordinance is that it makes your island immune to dramatic time shifts, meaning that you can time travel around without worrying about your island’s state. This is a helpful Ordinance for those who like to play the game on their own time.

The Early Bird Ordinance will shift everyone towards daylight. Villagers will adjust their sleep schedule to be more active during the wee hours of the day, but turn in earlier at night. Both Nook’s Cranny and the Able Sisters will open an hour earlier, so their new schedules are 7AM — 10PM and 8AM — 9PM respectively. This Ordinance is perfect for players who find themselves playing mostly during the daytime.

The Bell Boom Ordinance is for stimulating your island’s economy. Everything will be 1.2x pricier, whether you’re buying or selling. For example, a pear normally sells for 100 Bells, but with Bell Boom in effect it will sell for 120 Bells. Just remember that this also affect buying prices as well, but if you’re careful about your resources and craft most of your tools, you can make a lot of Bells with this Ordinance active. If you’re looking to make a huge profit from fishing and bugs, this is the Ordinance for you!

Kapp’n will now appear at the small wooden dock on your island — not the Dodo Airlines dock! Talk to him and he’ll take you on a mystery tour for 1,000 Nook Miles, similar to that of Dodo Airline’s mystery tours.

You may also visit islands with never-before-seen flora, including thick vines that you can use as ladders, and special flowers with pretty designs. There’s lots to explore now, and the best part is that you can find Gyroid fragments buried on the islands.

Gyroid fragments can be buried back at your island. Give them some water, and they’ll eventually grow into full-fledged Gyroids, which are basically little goofy robots. Each Gyroid has its own behavior and personality, so grow lots to see which ones you like the most!

How to Unlock Brewster’s Café

Head to your museum whenever you like. You should see Blathers in his usual spot, but he’ll have a thought bubble over his head. Talk to him and he’ll tell you that his newest idea for attracting more customers to the museum is to build a café, but he’ll need the help of an old friend to get things started. Blathers will task you with finding Brewster, who was last seen island hopping in search of buried Gyroids.

Search around the island, and you should find Brewster wandering around. Talk to him a couple of times and tell him that Blathers is looking for him, and he’ll agree to head to your island. Before you leave the island, you can dig up a buried Gyroid if you’d like — there’s always at least one hidden somewhere.

Once you’re back at your island, go talk to Blathers again and tell him the good news. Turn in any fish or insects you have, because the museum will close down the next day for renovations. After that, the café will open for business inside the museum!

Related | How to Get Poki in Animal Crossing: New Horizons Happy Home Paradise

How to Unlock Harv’s Co-Op

Upon starting the game after updating to version 2.0.0, Isabelle will mention Harv during her announcements. This is your cue to fly over to Harv’s island using Dodo Airlines.

You’ll notice a new path to the right of Harv’s studio. Follow the path, and you’ll see Harv and Harriet talking in a big open field. Talk to them and you’ll hear about their plans of starting a new Co-Op right on the island, but they won’t be able to get it off the ground without your help.

Once you’re done talking, you’ll see seven new Lloids appear around the perimeter of the field. Each Lloid will invite one of the various special NPCs that visit your island, and this basically acts as a central hub for all of them to set up shop. Each Lloid asks for 100,000 Bells to cover the fees, so this means you’ll need to fork over 700,000 Bells if you want all the NPCs to move in.

Be sure to bring at least 100,000 Bells before you leave for Harv’s island, as there is no ABD there. Although, once you get at least one of the NPCs to move in, he’ll install an ABD near his studio, making things a lot more convenient.

The Lloids won’t refer to the NPCs as their names, but instead describe their role and job, cluing you in on their identity.

Katrina will tell your fortune and luck for the day. Sahara will sell you rare rugs and wallpapers. Tortimer lets you send stuff to your storage. Reese & Cyrus can customize furniture for you. Leif sells flowers, shrubs, and produce starters necessary for cooking. Redd sells paintings. Finally, Kicks sells shoes and socks.

One more thing: Harriet will set up her mini-barber station in the center of the Co-Op. Every day, you can come get a random new haircut that will permanently be added to your selection of hairstyles listed in the Vanity menu, so make sure to get a new style!

There are plenty of other small things to note, too! There’s a radio outside of Resident Services where you can start a stretching mini-game with your villagers. It’s nice and cute, and we recommend giving it a shot!

There’s new DIY recipes to get, as well. There are helpful items like being able to craft your own Donation Box which lets you sell items easily, and a Storage Shed that lets you access your storage without having to be in your house. Check them out!

That concludes our guide on Animal Crossing: New Horizons’ version 2.0.0 update! If you’ve got any other tips or tricks to share, let us know in the comments below!