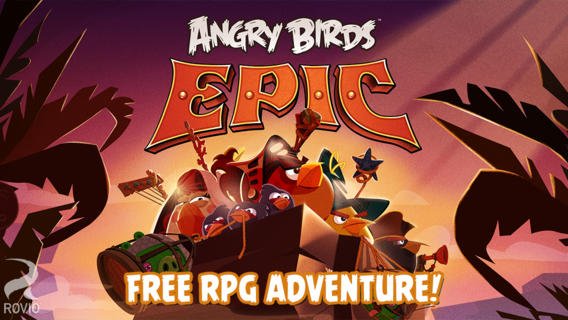 Rovio launched their first RPG on the App Store. Titled Angry Birds Epic, the game took the world by storm, as anticipated, and became an instant hit – something that most Rovio titles manage to achieve. The game is one of high quality too, and we are here to help you up boost your strategy with some Angry Birds Epic cheats: tips, tricks and a complete strategy guide to keep on winning and getting those three star ratings easily!

So let’s not waste any time and let’s check out below Touch Tap Play’s best Angry Birds Epic tips, tricks and strategies!

1. The best strategy to using your birds
As soon as you unlock the Cleric, things become really nice in terms of strategy since her healing powers are extremely useful. Have your Mage equip the Lightning Bird hat that allows you to select one of your birds that attacks a random enemy. Only select the Cleric, which does 40 base damage (more than the Knight) and also restores 8 health to your troops. Then you will attack once again with the Cleric, getting 16 free health. When the Chili meter fills, use it again with the Mage for extra healing from random attacks from the Cleric. Make sure that you always have them under the Knight’s shield and you’re ready to wreak havoc in all stages!

2. Focus on one pig at a time
Tap and hold on your enemies to see their stats. See which one is the most dangerous one and also fastest to take out and focus on bringing that pig down. Sometimes killing smaller enemies that do little damage first is better that focusing on a big enemy because accumulated, all the damage from the smaller pigs will result in you getting more damage than what you’d get from the big ones only. So be smart when it comes to picking up your targets!

3. Add friends!
It’s extremely important to have at least a few active Angry Birds Epic friends who play the game and send you those items that allow you to re-roll: not only that you can try for better rewards in each stage, but it’s a must to have at least a couple when you craft equipment and use them until you get the three star roll for the best possible equipment. It’s extremely important to get the 3-star equipment because you can’t improve it later!

4. Buy all the equipment available
Whenever you get the coins, make sure that you buy all the equipment and items available when you unlock a new area in the game. Even if you don’t have the materials to craft them all, it’s better to have them in one place and decide what strategy to apply when it comes to collecting resources. The same goes for the helpful consumables like Banana Juice and Chili filler: make sure that you have as many as possible on you when playing starting each match.

5. Watch videos for extra skills
Whenever a very difficult mission comes (you can see it’s difficulty on the meter before the mission starts), take Rovio’s offer to watch a free video for 20% more health and attack. Don’t overdo this because the number of videos is limited and you can’t watch a video before every mission in the game.

6. Replay missions
Replaying missions gives you slightly more difficult enemies to defeat, but you should do it for one main goal: getting the resources needed for crafting. There is some digging to be done, but the general rule of thumb is this: find the easiest mission that rewards you with the resource(s) that you lack and keep playing it until you have enough to craft your new piece of equipment. There are rarely any other reasons to replay missions unless you are looking for a particular piece of loot!

7. Don’t overspend the consumables
Sometimes, losing a bird in your crew during a mission is not that much of a problem, especially if you’re towards the end of the mission. This means that you should be very careful when it comes to spending your consumables in Angry Birds Epic, because they are pretty difficult to get. Only use them when there’s no other option and you really need a particular bird alive or rage meter filled or whatever in order to succeed.

8. Find your own pace
The great thing about Angry Birds Epic is that it has no energy requirements and you can play for 24 hours straight (although it is not really recommended to do so). The idea is to find your own pace, do as many missions as you can in the main story then return and purchase all items/get more resources from previous missions. This is the winning strategy and you can easily beat this game without spending any real life money!

For now, these are the best Angry Birds Epic tips and tricks that we have for you and I really hope that you found them useful!