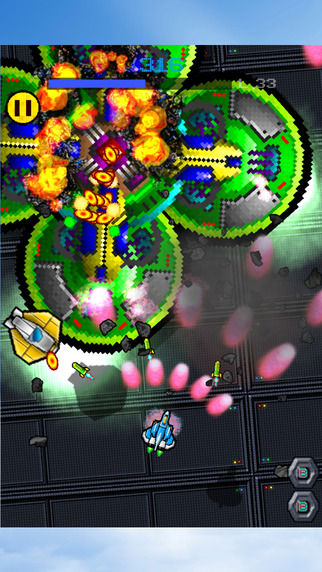 The Raiden series is one of the more successful scrolling shooting series ever released, with the original arcade release having managed to become one of the most played arcade games in Japan for several months back in 1980. Following the original arcade game, several other Raiden games have been released on a variety of formats, enhancing a gameplay formula that changed very little during the course of the years.

Unlike what it may seem at first glance, Alpha Raiden is not an official entry of the series but only a fan game created by the one man Angry Water Studio team, the team behind Mirage Thunder (A.D. 1993). For being a game developed by a single person, Alpha Raiden is a rather good title, combining the classic Raiden gameplay experience with some interesting features.

In Alpha Raiden, players will have to choose between two different ships and travel through an endless stage shooting down a variety of enemy ships and the occasional bigger boss ship, which requires a bit more effort to take down . The game offers both tilt and touch controls, which are used to steer the ship to the right and left. By steering the ship, it’s possible to slightly alter the scrolling speed, a gameplay feature that opens up some interesting possibilities. While both control schemes aren’t really suited for this type of game, I have found the touch controls to be slightly more precise during hectic sequences.

Unlike similar games, Alpha Raiden doesn’t feature a set difficulty level but a dynamic one that changes depending on the player. By destroying enemy ships, a bar will be filled in the upper part of the screen, making the difficulty level increase. Higher difficulty levels make more enemy ships appear on screen, turning the game into the bullet hell experience fans of the series have come to love over the years. This particular design choice makes Alpha Raiden a good game for those who have never played a scrolling shooting game, easing them into the gameplay experience and increasing the difficulty gradually as the player gets better.  No matter the difficulty level, the game gives players plenty of offensive options in the form of a few weapons with different shooting patterns, lasers, powerful missiles and even a devastating bomb that explodes when your ship is shot which destroys all enemies currently on the screen.

Graphics wise, Alpha Raiden is a rather colorful game, with ships, bullets and explosion being quite pleasant to the eyes. The designs aren’t extremely varied, but this isn’t a major problem, as the simple graphical style allows the game to run smoothly at all times even when the screen is literally filled with bullets. The game’s soundtrack is also quite nice and it fits the game well. And with an update on the pipeline, one that comes with support for iOS 7 too (at the moment it’s only iOS 8+), more people will be able to experience the game!