Home Game Guides How to Recruit All Chained Echoes Characters

Chained Echoes is a 16-bit SNES-style modern classic RPG that offers a myriad of unique characters, some who join your party, some who you meet while strolling around, and some who play a significant role in the game’s story and leave a mark on you. To ensure you don’t miss out on any character, we created this handy guide on how to recruit all Chained Echoes characters.

Here is the complete list of characters available in Chained Echoes or were mentioned on the game’s Kickstarter page.

Since Chained Echoes critical reception is excellent, there are chances we can get additional characters in the form of DLCs. When that happens, we will update this list.

That concludes our guide on all characters in Chained Echoes. If we missed any characters, let us know, and we will add them to the list. 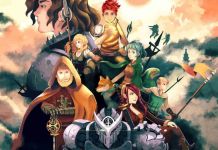 What Are Canned Enemies in Chained Echoes? – Explained

How to Recruit All Chained Echoes Characters