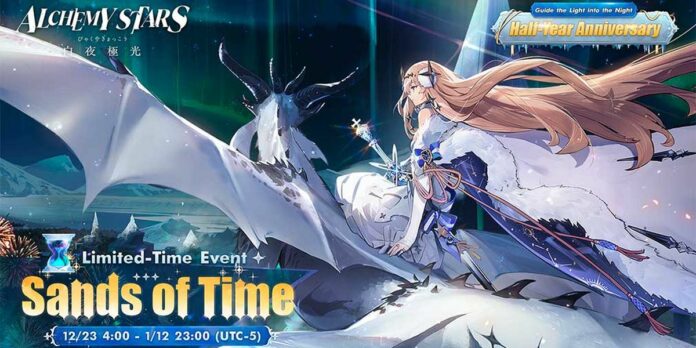 This article is sponsored by Alchemy Stars

The popular tile-based RPG Alchemy Stars, celebrates the winter holidays with brand new mechanics, new Aurorians and a lot of free in-game rewards in the latest event, Sands of Time. Between December 23rd and January 10th, players will be able to partake in the event stages and throughout most of January they can also take part in the latest Special Event Book, Phase 4.

With the event currently underway, this is everything you need to know in order to make the most out of it:

The Sands of Time Event

This two-part event will run from December 23 until January 10, and it is divided in two parts. The first one, Northland Journey, and the second one, Trial of the Aurora. Both of these parts will require Action Points for the event. 1 Action Point recovers every 4 hours, up to a maximum of 30.

The second part, Trial of the Aurora, is just like Northland Journey, but will become available on December 28. The Aurorian Trials will feature exclusive character backstories, for some of the newest Aurorians in Alchemy Stars: Bethlehem, the Queen of the North, Novio, and Lola.

By clearing all these event stages players will be rewarded with 2000 Lumamber and 2 Special Star Flares.

Each day players will be able to answer one daily question about the game in the Lake Mirror Codeword questionnaire. The minigame will run for several days, from January 4th until January 13th, with a new question coming up every day. Players have 3 chances to answer it correctly, and by correctly answering seven questions, players will earn 420 Lumamber.

Completing the event stages grants players Mistletoe, a currency used to exchange in the Cedar Market. From here, a new free Aurorian, Lola, will be available, as well as her Solambers and a ton more rewards, including furniture, breakthrough materials and Special Star Flares.

For each day the player wil log into the game during the Sands of Time event, they can claim some free rewards to use for upgrading their roster of Aurorians. They are as follows:

Furthermore, logging in and reaching 60 Activity between January 6 until January 13, players will also receive 600 Lumamber and some upgrade materials.

There will be 4 new outfits added together with the event, 2 of which are free to obtain, and 2 which can be purchased from the in-game store.