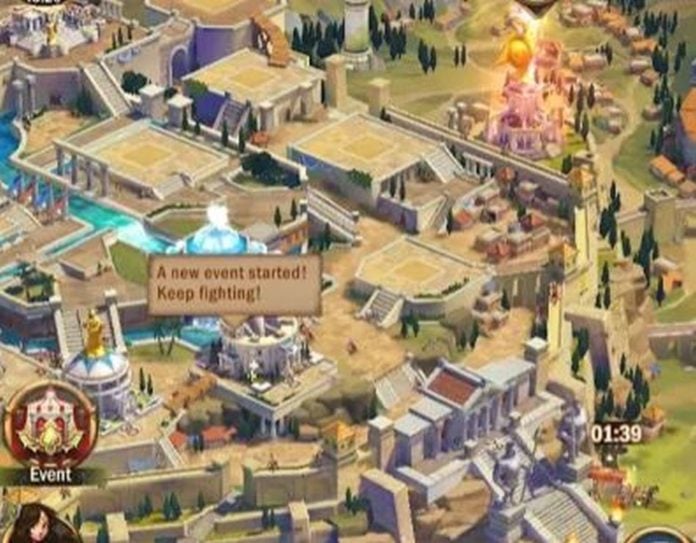 In today’s article we are going to cover all of the Age of Myth Genesis tips and cheats to help you build a powerful empire and to upgrade all of your buildings in due time and therefore become the best Lord there ever was!

If you have played this type of games before, then you probably are already familiar with all of the game’s mechanics and features, but if you are new, then don’t worry – we are here to tell you all that you need to know and help you become stronger, build a strong fortress and farm resources like a pro.

So let’s not waste another second because you came here to learn the Age of Myth Genesis tips and tricks, so let’s dive right into them right here below!

Right as you are starting off, you will see that in the Southern area of your city you will have a few empty plots of land where you can build your resource farms, training grounds and so on.

I suggest that you start by building all 4 available Farms (at start, then it will upgrade to 6 and so on), then all Sawmills and Training Grounds because those will help you increase in power and the resource farms (Farm, Sawmill, Stone Mine and Iron Mine) will keep generating resources for you.

The best way to go about this would be in my opinion to always keep them built at maximum number available, and whenever this number increases, you should always build more!

The only one that I really don’t see much need for to be at max number is the Medic Tent for now. That will come in handy later on when you are fighting more and more and your troops will be injured, and you will need to heal them up ASAP. At start, just build one Medic Tent or two and then focus on the rest of the resource farms.

Since you will only unlock the Iron Mine and Stone Mine later, make sure that you will have enough slots to build those – which takes me to my next point:

You will be able to unlock more lands by upgrading your level, and having the necessary resources to unlock them. Those will be marked with a wooden sign with a blue “x” on it, and whenever one becomes available to unlock, it will be highlighted so you can’t really miss it!

I would suggest that as soon as you notice a new land available to unlock, you unlock it immediately and place down some buildings because it’s going to come in handy quite a bit. Therefore start unlocking those lands and never worry about running out of Food, Wood or anything else ever again.

Especially early on, unlocking an extra pair of working hands will be super useful because it will help you build your base faster and that will be super important. You can hire the extra builders by selecting the hammer in the upper left side of the screen.

By having two sets of workers you will be able to build twice as fast, so you should get started right away! Start by building everything that you can and is available at your current level, then move on to upgrading them!

Build and upgrade for free

Whenever you build a structure for the very first time, it will be free, so you can build that for free by pressing on the left button which shows a Gem and free. That works for everything that you are building at start, and also for some upgrades which take 5 minutes or less.

So keep in mind: all the structures which take 5 minutes or less to upgrade / build, can be upgraded / built for free by pressing on the left button or on the Free button which appears on top of them!

I suggest that whenever you build something, you also start upgrading it to the maximum level possible for free, then upgrade it further if it is necessary afterwards. But about upgrading, let’s go a little bit more into detail about that below.

Upgrade your buildings the right way

When you are upgrading a building, as mentioned before, it can be done for free if it taken 5 minutes or less than that. I suggest that if you have 2 builders, you should focus on the buildings that are necessary towards upgrading your Castle. You can see what is needed to upgrade the Castle by tapping on it -> Upgrade -> there you see what level building you need – if there is something you can do, tap on the Jump button to be taken there.

In my opinion you should always try to upgrade your buildings as much as possible for the current level that you have, because that is going to make it easier when you level up to just upgrade them once and you will be up-to-date with all of your structures.

First things first, you should make sure that your farm resource buildings are upgraded, and that is because they are going to constantly produce resources for you (even while offline) and you can claim them once you see the icon on top of them. Secondly, make sure that your Castle and Wall is always upgraded, because those will help you making your stronger.

Tap on the citizens with chests

Every now and then you will notice some citizens walking around the city and having some chest icons above their heads. Tap on them to claim them, because that is going to make quite a big difference! The rewards you can claim will be various boosts and other useful loot, and they will appear quite often – so don’t miss them!

Complete the tasks and earn rewards

In the bottom left side of the screen you will see your list of tasks, and whenever you complete a new one you will be able to claim the rewards for it! Since there are quite a lot of tasks that you can do in game, let me cover all of them for you:

– The Chapter missions: those missions are in the bottom left side of the screen and they have the icon which looks like a hand holding a scroll. There, you can find the Chapter missions which give you tons of rewards for completing each mission, but also a bigger reward when completing all of them (completing the chapter).

– The Quest line tasks: those will appear underneath the Chapter missions, and they are shown by a simple text with an exclamation mark in front. Those can be followed when you don’t know what to focus on next in the game, or simply when you want to progress the way the game tells you to. All of the tasks will give you rewards, so they are quite useful too!

– The Quest tab: this will be found in the bottom left corner of the screen, and it will appear as a shield with two swords on it, and the text Quest underneath. There you will have all of your in game missions – the arms quests, the construction quests and the other quests, and whenever there is a new mission that you have completed, it will be shown with a red circle. Go do these if you want certain rewards that they give because they are not super difficult.

– The in game Events: the events in game will be shown in the bottom left corner on the icon with the Event text. There you will find various missions which are time limited, and give out quite useful and unique rewards too. Check this tab often because you will want to complete the events within the time limit!

Whenever you level up, you will gain skill points which you can allocate in the Lord tab. There, you will have two main branches which you can develop – the War and the Development. I suggest that firstly you should start in the Development and allocate all the points to the Building Speed, because that is going to make it easier to build and upgrade.

Research Time is also super important, so make sure that you level it up to max too, because I really consider it to be a very effective way to improve your city.

Always be researching something

Some of the researches take longer than others, so before you close the game and go to bed I suggest that you set the Library to research something that takes a lot of time, so it can be done offline while you are doing your own thing. While you are in game active, try to research various fields that take less time.

Research priorities: First thing that you should max out should be the Development -> Architecture I, then you can move on to the Rapid March I. Then, in the Resource -> Irrigation I and Arbor Day I should be followed because those increase your farm productivity. Either way, try to make Development your number 1 priority because the perks you get from it are very good at making your city more powerful.

Every single day that you log in to the game you will be able to claim some very cool rewards. Those can be anything from speed ups, to Gems and so on, so try to log in even if you don’t plan on playing that particular day. That will help you gather stuff quicker and make it easier to upgrade structures with all the free boosts you get!

You can speed up the building process by using the Speed Ups which you can claim from various quests. I suggest that you mainly save them for the Castle upgrade, which takes longer than any other building, but also for certain key building when necessary.

Keep in mind that you shouldn’t use the speed ups with longer times for a short time boost, so for example if you need to speed up the building by 15 minutes, don’t use a 1 hours speed up because it will go to waste – use instead 2x 5 minute speed ups and then the last 5 minutes can be upgraded for free!

Joining an active alliance is going to be a super important thing in the game, because it will make building and upgrading stuff which take a long time very quick! I suggest that you take your time and find an active one, because if it is active it will help you improve faster.

That is, because you will be able to ask for help building and upgrading from the other alliance members! That will significantly reduce the building time, so make sure that even if you don’t join one very early on, for the late game you try to find one where people help each other a lot (also, make sure that you help them build too!).

Those would be all of our Age of Myth Genesis tips and tricks that we have for you right now! Do you know some more useful game tips and tricks? Share them with us down in the comments section below!