There are six hordes that you have to choose from when starting to play Age of Apes on mobile. However, since you know absolutely nothing about the game itself, choosing the best horde in Age of Apes becomes a tricky thing to do.

But today we’re here to help you make the right choice and take the guessing out of the equation. We’re here to tell you which of the six hordes is the best one in the game. Or, better said, which is the best you should choose depending on the play style you anticipate.

So let’s get straight to business and look at the details of each faction, before deciding which one is the best!

The Six Hordes in Age of Apes

Best Age of Apes Horde Based on Play Style

Looking at the factions above, we can see that they are pretty balanced and just a few can be considered specialized on a specific area. Therefore, choosing the best one for you isn’t the easiest task ahead. But do think how you want to play the game – mainly attack others or do more in PvE. Based on this, you can select the best horde in Age of Apes.

If you plan to play a more passive game, Razorteeth Hunters is the best possible option for you due to the bonuses it offers. Otherwise, the Deadly Shooters are great for PvP and can be considered the best horde if this is how you plan to play.

The Razorteeth Hunters are the obvious choice for more peaceful players. They focus heavily on PvE boosts, making it easier for you to attack on the map both with a faster march speed, as well as better AP recovery.

Plus, getting that 10% strength bonus in PvE means that you can send more troops gathering resources or keep more at home defending your base. All in all, the perfect choice for non-aggressive players.

What is the best horde for PvP?

This is a bit more difficult to choose, but I would still go with the Deadly Shooters. It might seem strange looking at the other options, but listen to my reasons!

The main one is the boost in Hospital Capacity. 5,000 extra beds is A LOT. This means that you will end up saving more of your troops after difficult attacks. And not having to retrain them is extremely useful.

Also, you get a slightly faster energy restore, allowing you to teleport more often – which is also a big advantage during fights. Finally, the Shooters that they get an Attack boost for are useful in battles against other players, being massive damage dealers.

These would be the second best option in my opinion, but probably what most consider the best. This is because you get an attack boost for Wall Breakers, which are THE unit for attacking other cities. You also get to train your troops faster, which is always great.

The Iron Gathering speed boost is a bit of a miss here as it’s pretty much useless since you only get a 2% boost… but all in all this can be a good choice for more PvP oriented players.

I still don’t consider them the best because the ATK boost to Wall Breakers is pretty much useless unless you are fighting other players, while the Deadly Shooters’ boost is a bit more versatile and useful in more actual situations.

Can you change hordes after choosing one?

At the moment of writing, it appears that you are not allowed to change the horde after choosing it. We are sure that this will become an option later on in the game, when new updates are released.

But since you can’t do it at the moment, make sure you are choosing a faction you are very happy with and will potentially play indefinitely.

I personally played it safe and went for Razorteeth Hunters, simply because I am not really that fond of PvP and I prefer the more passive bonuses.

I consider the Deadly Shooters equally good (but for PvP oriented players), while the Bomb Disciples are good too – but not quite there.

Remember: This Age of Apes article was first published on Touch Tap Play. 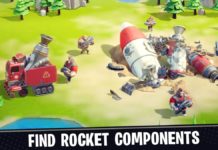