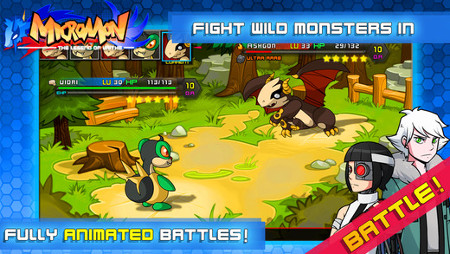 If there’s a video game series that would do really well on iOS devices, it would be the Pokémon series. Being a Nintendo series, however, it’s highly unlikely that it will ever see a main entry of the series released on non-Nintendo hardware.

The upcoming Micromon is probably the closest thing we can have to a Pokémon game on the App Store. The game, developed by Moga Interactive, shares quite a few similarities with the Nintendo series like over 100 creatures to capture, train and evolve, a multiplayer arena where it’s possible to fight against the creatures of other gamers and a massive single player mode where players will explore the game’s world in search of the strongest creatures. Many of Micromon have been taken from the Pokémon series so if you like the Nintendo franchise, there’s a good chance that you will like this game as well. Maybe Micromon is way too similar to the Pokémon series so don’t expect to be surprised by its gameplay experience and features.

Micromon will be released on the App Store tomorrow in all regions. The game is also on the cheap side since it will cost only 0.99$. Make sure to check it out if you have always hoped to play a Pokémon game on your iOS device.