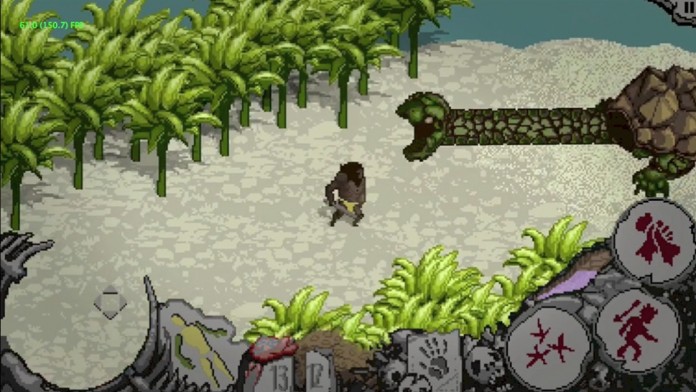 As I’ve said time and time again, there’s something unique in the iOS gaming world that cannot be found anywhere else. Together with more regular games, we also get some titles that really try to go beyond the boundaries of genres, introducing some really unique ideas.

Some other times we also get some unique setting that have been rarely used in the gaming medium, like the the setting of the action role playing game Isle of Bxnes.

Isle of Bxnes is set during the stone age, a hard era for hard men, where humanity was still in its infancy and wasn’t shy in showing its really brutal ways.

Isle of Bxnes adds a survival element in a classic action role playing game formula, as you will have to forage and hunt for food during the course of the game as well as fighting other tribes to gain control of their territories. Brutal indeed.

The game also promises to be a challenging experience, as enemies will be able to take you down in just a few hits. To avoid ending up as a stone age blood pulp, you will have to prepare very carefully before entering the randomly generated dungeons of the game. Multiple skill trees will also allow you to customize your character in a few ways.

Isle of Bxnes was supposed to be already available on the App Store. Unfortunately the game had to be resubmitted to Apple for approval. It should be coming soon and we will keep you updated as soon as it is.

In the meantime, you can check out a gameplay video for the game right below. Ready your clubs, folks!