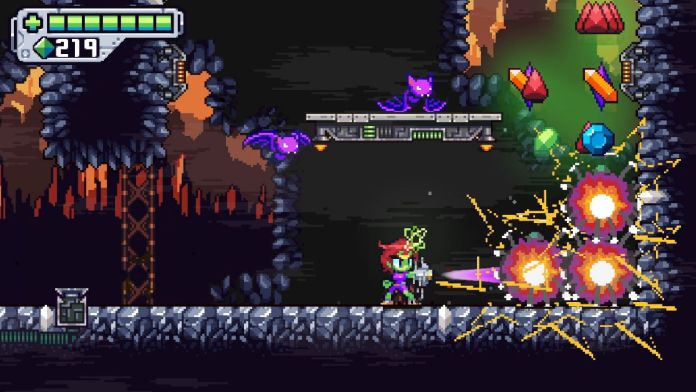 Journey to the depths of the moon in Moon Raider, an action-packed 2D platformer that is reminiscent of classic run’n’games like the beloved Mega Man series.

A race of green humanoid aliens known as the “selenites” have colonized the moon. With their advanced technology and rapid development, the selenites have enjoyed a period of peace and prosperity.

However, the selentines rely upon precious moon gems to supply energy. With their reserves dropping to critical levels, Dr. Cavor and Selene send their daughter Ava into the depths of the moon to retrieve as many moon gems as possible.

Moon Raider puts players into the shoes of Ava, an agile selenite equipped with a powerful arm cannon. Ava must brave the underbelly of the moon through ten different environments full of traps and danger.

Ava quickly encounters a rebel force of corrupt aliens, and stumbles upon a plot that will put the entire moon in jeopardy. Ava must fight giant bosses, dash her way through treacherous levels, and collect as many gems as she can while putting a stop to the rebellions plans.

Moon Raider is now available on the iOS App Store for 5.99 USD.